Silver Avenue in Argentine, Kansas, about 1900.

Argentine, Kansas, was formerly a city in Wyandotte County. It was annexed by Kansas City in 1910.

Located on the south bank of the Kansas River, three miles from its mouth, this was the site of a former Shawnee Indian reservation. In the late 1870s, the Atchison, Topeka & Santa Fe Railroad built a transfer depot, side tracks, a roundhouse, coal chutes, shops, train sheds, and other facilities. A town sprung up here afterward, and various business interests selected the site for manufacturing. 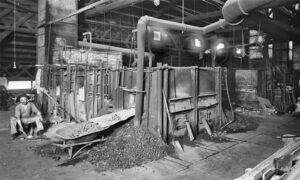 Growth in the new town was given additional momentum in 1880 when the Consolidated Kansas City Smelting and Refining Company erected a small smelting plant. It was ready for business in August of the same year.

The townsite was platted on 60 acres in November 1880 by James M. Coburn. It was called Argentine, meaning “silver” or “silvery.”

In April 1881, another 415 acres were purchased by the Kansas Town Company. After turning over some of the lands to the Kansas City, Topeka & Western Railroad (later the Santa Fe), the remaining 360 acres, were platted for Mulvane’s Addition to the town of Argentine.

A year after the smelter construction, August R. Meyer gained a controlling interest in the business and began a program of expansion and enlargement. Ore was shipped by rail to the Argentine plant from various parts of Mexico, Canada, and the United States, especially Colorado. The ore and base bullion was received from the mining districts of the mountains and was crushed, separated, and refined into several marketable metals. These works had 20 acres of land at the smelter and the necessary buildings, offices, guard houses, sheds, and dwellings covering the grounds. The company employed more than 250 men and operated 25 hours per day, seven days a week. 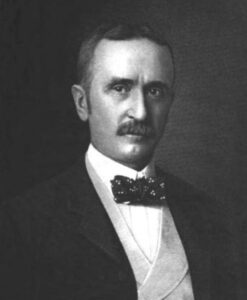 August Meyer came to Kansas City with an impressive background. He was educated in America and Europe in mining and worked in several Colorado mining communities, including Fair Play and Leadville. He was not only a prominent Kansas City, Kansas businessman but was also instrumental in business in Kansas City, Missouri, and a civic leader.

Argentine was a wild and woolly place at that time. There were 56 houses, no church, 27 saloons, a grocery and a dry goods store, the depot, smelter, and the Santa Fe shops.

The Congregationalists held church services beginning in the summer of 1881, but it was not until May 1882 that a church was organized, and a church building was erected before long.

In October 1881, School District No. 40 was established, including the Argentine city. A very successful school was held in the winter of 1881 and 1882. The colored children attended a separate school.

By 1882 Argentine had a sufficient population to form a city and was incorporated as a city of third class. In August 1882, a city government was organized and the following officers were elected: Mayor, G. W. Gully; Councilmen, John Steffins, A. Borgstede, W. G. Blue, Patrick O’Brien and George Simmons; Police Judge, A. J. Dolley; Marshal, Charles Duvall; City Clerk, J. H. Halderman.

Bonds in the amount of $7,000 were also voted for to build a schoolhouse. 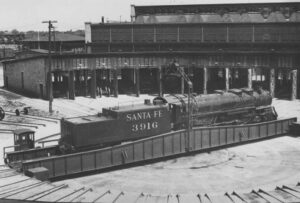 The Myers House, a large and handsome two-story frame building near the depot, was completed in the summer of 1882. It was the largest hotel in town.

In the next years, many other commercial enterprises located in Argentine because of the excellent transportation facilities.

However, the smelter was closed in 1901 by the Guggenheims, a German family with whom Meyer had merged. Factors contributing to its closing were that Colorado ore was refined in new smelters nearer the ore and Mexican ore was cheaper to ship by water to the east. During its operation for two decades, the Argentine facility became the world’s greatest ore-smelting and refining plant. 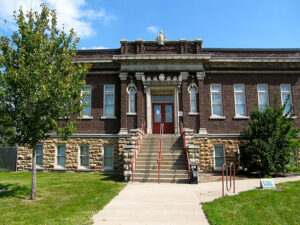 Afterward, the city was in the throes of an unprecedented financial crisis. The post office closed on July 1, 1903. By 1907, the city began to seek entry to nearby Kansas City in 1907, and the community was annexed to Kansas City, Kansas, in 1910.

At that time, it had extensive railroad repair shops, large factories, many retail stores, paved streets, excellent water and lighting systems, a street railway, a good public school system, many churches, good hotels, and was an extensive banking town. The population in 1910 was 6,500.

Today, Argentine is a neighborhood of Kansas City, Kansas, but still has its own identity and community spirit. 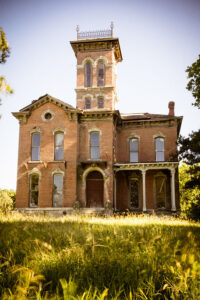