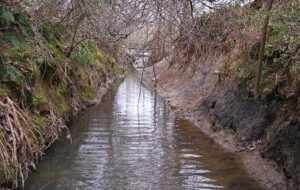 The Ashland Colony, sometimes called Ashland Bottoms, was initially established in Geary County, Kansas, within a few months after the passage of the Kansas-Nebraska Bill.

Within a short time, steps were taken in Newport, Kentucky, to organize a colony to found a settlement in Kansas. Several local meetings were held, but nothing was definitively accomplished until the end of 1854. At that time, Johnson Williams, acting as a scout for the colony, chose the site hemmed by the stony Flint Hills and McDowell Creek feeding into the Kansas River. Deciding the rich floodplain was a suitable spot, he returned eastward.

Early in 1855, about 60 people from Covington, Kentucky and Cincinnati, Ohio, embarked on the steamboat Express for Kansas Territory. The boat arrived at Kansas City, Missouri, in March 1855. A site had been previously selected on the south side of the Kansas River, near the mouth of McDowell Creek. The original intention was to make the entire trip by water, as the colonists believed the Kansas River to be navigable. However, when they arrived in Kansas City, they found that their boat would be unable to proceed farther. Emigrant wagons and teams were then procured for the remainder of the journey, and on April 22, 1855, they reached their destination. Many of these colonists were admirers of Henry Clay, and the town they laid out was named Ashland, after his plantation estate in Kentucky. The name was also given to the township that was subsequently organized. 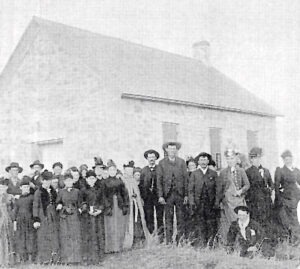 Soon afterward, the Irish Catholic Dempsey family also arrived and represented some of the early burials in Ashland Cemetery.

A few of the colonists became discouraged and returned to their old homes in Ohio and Kentucky. Still, the majority were prepared to encounter the hardships of pioneer life and went bravely forward with the erection of log cabins. On December 29, 1855, a post office was established with William Mackey as postmaster.

The community soon became a significant town, and in March 1857, the town was made the county seat of Davis (now Geary) County. Several terms of the territorial court were held there by Judge Elmore before the seat of justice was removed to Junction City in November 1860. With the removal of the county seat, Ashland began to wane. Some of the leading members of the colony found better opportunities, and the post office closed on April 1, 1868. The small town suffered another blow when it was bypassed by the Blue Valley Railroad, which instead ran through Manhattan to the north and Junction City to the west.

In 1870 Michael Brannick, a stonemason and community leader, organized to build a church in 1870 on the three acres of land donated by James Ryan, an 1855 pioneer in the area. Before then, the community held services in private homes and other buildings. The new church, made of limestone,  resembled the one-room schools in the area. The facility served both  Ashland and the McDowell Creek community. 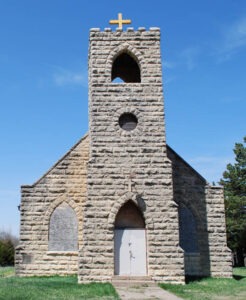 In 1873 the legislature transferred Ashland township to Riley County.

In 1910, the old church was removed, and a new Gothic Revival-style church was built. St. Joseph’s Catholic Church held services until it closed in 1989. In 1993 the items inside the church, including the Stained Glass windows, were removed and auctioned off or taken to other churches in the area.

Today, all that is left of this community is St. Joseph’s Historic Church and Cemetery, located along McDowell Creek in Wingfield Township. The church property is listed on the State Register of Historic Places.