An old truck in Bala, Kansas by Kathy Alexander.

Bala, Kansas is a ghost town in eastern Riley County.

In the spring of 1862, A.D. Phelps settled on the fork of Timber Creek and, for years, was the only setter in the vicinity.

In March 1870, Reverend R. Gwesyn Jones and James Hughes Jenkins visited Riley County, and considerable land was purchased from the Kansas Pacific Railroad Company for $2.50 an acre to establish a Welsh settlement. 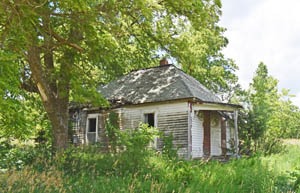 An old house in Bala, Kansas today by Kathy Alexander.

Jones, who had immigrated from Wales in 1867, was the pastor of the Welsh Congregational Church in Utica, New York. Jones and his associates created the Welsh Land and Emigration Society of America. They sought to establish a colony in Kansas because many Welshmen recently had been evicted from their farms by Tory landlords. James Jenkins, a Welshman, had emigrated to the United States in 1868 and to Kansas in 1869, where he joined the Welsh Community at Arvonia in Osage County, Kansas.

By July 1870, Jenkins served as local agent for the Welsh Land and Emigration Society and led the first members to the colony. With him were Thomas Daniels, Rowland Davies, J. Griffin, John E. Hughes, Owen R. Jones, Theodore Morgan, William Randall, Richard W. Roberts, J. P. Thomas, David Watkins, E. C. Williams, and others. The immigrants initially called their settlement Y Bala yn Powys, named for a town in North Wales. By the time the 1870 federal census was taken, the settlement had been established, and 23 natives of Wales had arrived at the scene.

Jenkins, at various times, also served as a notary public, sold insurance, and operated drug stores and banks in both Bala and nearby Leonardville.

In a letter to the editor of the Manhattan Standard dated September 13, 1870, “Min Hafren” reported that the Powys Coal Company soon would be able to supply Manhattan and other towns with fuel, but the “good coal vein” which had been found near Bala apparently did not prove to be as valuable as anticipated.

Within a short time, the settlers were unable to locate sufficient water and moved two miles west closer to an excellent spring, In 1871, they laid out the town of Bala, and a post office was established in Rowland Davies’ general store on February 24, 1871, taking the place of the old Timber Creek Post Office. Roland Davies was appointed postmaster. 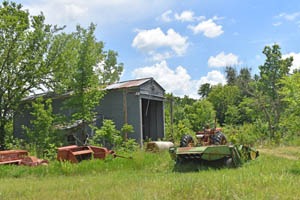 Old shed and equipment in Bala, Kansas by Kathy Alexander.

Bala Township was organized from the southern portion of Milford Township on July 30, 1871.

“We have now in Y Bala only six homes, a store, an office, and a smithy already established, but there are two or three places already started, and the town hall, which will be intended for the use of the public and for religious services.” – Rowland Davies, July 1871

Early on, several churches were organized, including the Welsh Calvinist, an English Methodist Episcopal, and a Congregational (Welsh and English) Church.

The first cheese factory in the county was erected in Bala in 1876 by James Sharpless, who also had a general store. Mrs. Jenkins also ran a general store, and her husband James Jenkins owned a drug store. Other businesses of the time included a hotel, harness shop, shoe shop, and blacksmith shop.

The town thrived until the Kansas Central Railway was built through nearby Leonardville in 1881, causing business to decline. Another setback occurred in 1882 when a tornado almost destroyed the town.

In 1887 the Chicago and Rock Island Railroad laid their tracks 1.5 miles southwest of the village, and the station was named Bala City. Most of the town then moved closer to the tracks. 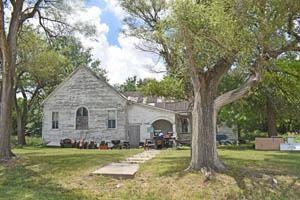 The Presbyterian Church was built in 1890.

The Bala City depot was discontinued during the Great Depression, and the hard surface county road bypassed both Bala and Bala City.

When Fort Riley expanded to the edge of town in the 1960s, the village died out.

Today, Bala has very little left except for a few hardscrabble houses and the old deteriorating Presbyterian Church. However, a stone-arched railroad bridge, one of the largest in Kansas is in Bala Heritage Park, southeast of town. 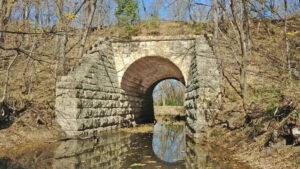 Bala is located about 25 northwest of Manhattan, Kansas.