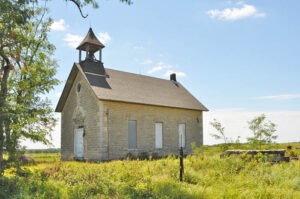 Bichet, Kansas was located about four miles east of Florence in Marion County.

French immigrants settled in the Cottonwood Valley from 1857 to 1885, growing to more than 60 families. Unlike many other foreign colonies in Kansas, individuals or family groups who arrived at intervals over a period of some 40 years.

A school was first established in Bichet near the Cottonwood River in Doyle Township in about 1878. It was built on property owned by Alphonse Bichet who came to the valley in 1858. The school was a frame building. The schoolhouse was destroyed by fire in 1896.

That year, J. Brouse Oldreive sold one acre of land to District 34 for $25 and the school district received $800 from the sale of school bonds. Oscar Johnson, a local stonemason who worked at the Oscar Horner Quarry, built the new school. Built from limestone found at the site, the school measured 24 feet by 44 feet with a height of approximately 30 feet at its peak. Outside, there were two identical stone outhouses situated along the west boundary of the schoolyard and to the north was a cave storm shelter made of stone including an arched ceiling.

It was completed on July 14, 1896. When school started in the fall Laura M. Keller was the first teacher, who was paid $40 a month for the eight-month school year. She taught 19 children from eight French families, who ranged in age five to nineteen years. Primarily serving a French-speaking student population, lessons were taught in English, enhancing the bi-lingual abilities of the students. Graduation ceremonies throughout the years were held in the Marion County courthouse with other rural schools participating.

The school was representative of many one-room schools that were constructed every three miles or so in each township. Until consolidation forced the closure of many of Kansas’s one-room schools in the 1950s and 1960s, students were taught by only one teacher in small groups.

The school continued to serve the community until 1946 when it closed because of low enrollment. At that time, there were only two students. The school was then sold at auction including the coal house, merry-go-round, furnishings, and books. The new owners allowed the old schoolhouse to be utilized for many events in the next years including as a base for motorcycle races, the local 4-H club, square dances, trap shoot contests, and family reunions.

The school and its outbuilding still stand today. Unfortunately, the school bell was stolen in the 1980s and authorities told the owners it had been sold for scrap iron. The school is listed on the National Register of Historic places today for its architectural significance and its educational contribution to the children of the French-speaking settlement.

Bichet School is the only thing left of the village. It is located 4.5 miles east of Florence on U.S. Highway 50 and 1/10 miles north on Bluestem Road

Compiled and edited by Kathy Alexander/Legends of Kansas, updated December 2022.