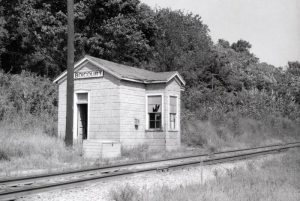 Boicourt, Kansas, once located about three miles northwest of Trading Post in Linn County, is an extinct town today.

The town got its start when J. B. Grinnell purchased 80 acres and made a survey. Lot sales began in the fall of 1869. Located at a place called Hensley’s Point, the settlement would go by several names throughout the years.

The first building erected by John B. Leabo, who opened a store. When the post office was opened on  December 1, 1869, Leabo was appointed the first Postmaster and the town was named Barnard. The first school was taught in John Morrison’s house, by William Stark, in the winter of 1869-70.

By the early 1880s, the small town contained eight dwellings and about 40 residents. On January 25, 1886, the name was changed to Cobb for just a few short months until July 9, 1886, when it was changed to Boicourt.

In 1910, Boicourt had grown to about 100 people. Through the years, the town dwindled and its post office closed its doors forever on March 31, 1964.

Today, the area is filled with farms and homes. Nearby are two historic cemeteries, including Maple Grove, which was established in the early 1860s. It is located at US 69 and 1800th St, seven miles north of Pleasanton.