Buckcreek, Kansas was located in the Rural Township of Jefferson County. It is an extinct town today. 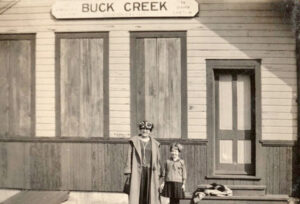 Buckcreek was a station on the Union Pacific Railroad located on the southern line of the county where the railroad crossed the border into Douglas County.

Predating the establishment of an official town, the Buck Creek School was built in about 1878. This school is a one-story native limestone structure with a gable roof that still stands in this vanished community. Buck Creek School served the families of School District Number 43 for 75 years as a center of education, public meetings, and social events. 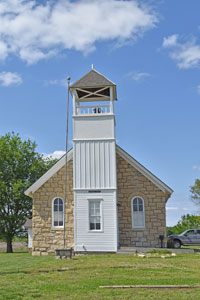 Consolidation forced its closure in 1952. It was then sold to the Valley Ridge Homemakers Extension Unit in 1954 for a meeting hall. Today this historic school is listed on the National Register of Historic Places. It is located at 15490 13th Street, Perry, Kansas, off US-24, two miles east of Williamstown.

More than 20 years after the school was established, a post office opened in Buckcreek on May 15, 1899. However, its life was short-lived. It closed on December 31, 1905. The community then received its mail from Williamstown by rural route.

Perhaps due to its brief period as a “town,” little other information could be found regarding the community.

Near the old townsite is the 823-acre Buck Creek Wildlife Area. This land is made up of native grass, oak-hickory hardwoods, row crops, and features one of the few remaining unaltered perennial streams in northeast Kansas. A wide variety of wildlife occurs in the area including, deer, turkey, squirrels, rabbits, and a host of other nongame wildlife. Waterfowl can occasionally occur in the area, either in the stream or on the harvested crop field. Some limited hunting is allowed through the special hunts program. 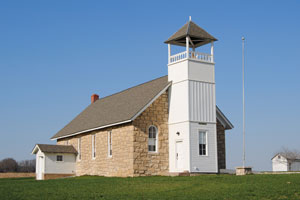 The wildlife area is approximately six miles northwest of Lawrence.