Burdett, Kansas, in Pawnee County,  was originally named Brown’s Grove in 1876 and named in honor of Dr. Gallitin Brown who settled beside a large grove of ash trees. 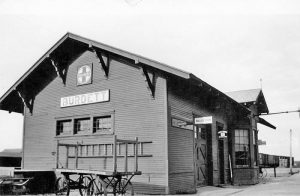 Situated on the banks of the Pawnee River, this village was first platted in 1876 and was surrounded by a very fine farming country that yielded some of the best wheat ever harvested in Kansas at that time. On June 21, 1877, it received a post office. In 1880, it became a station on the Atchison, Topeka & Santa Fe Railroad on the tracks running from Larned to Jetmore.

On April 29, 1887, the post office and the town’s name were changed to  “Burdette” in honor of Robert Jones Burdette who was a humorist writer in the newspaper business. Over the years, the last “e” in Burdette was dropped.

By the turn of the century, the small community boasted a bank, a money order post office, telegraph and express offices, a grain elevator, a hotel, and several retail stores. It had become the chief shipping and supply point in the western part of the county and its population in 1910 was about 300. Burdett was the childhood home of Dr. Clyde Tombaugh, the astronomer who discovered the former planet Pluto. 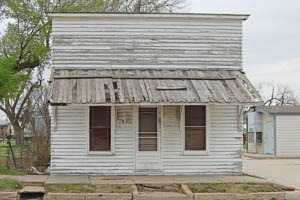 The very small community of Burdett has a population of just about 220 today and still retains its post office. It is located on Kansas Highway 156 about 23 miles west of Larned, Kansas.