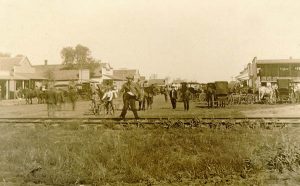 Burdick, Kansas, situated in southwestern Morris County on the edge of the Flint Hills, was first settled by Swedish immigrants from Illinois in 1880.

Before that time, a few Russian Mennonites settled in the area in the late 1870s and tried to raise wheat but soon became discouraged and moved westward.

When the Swedes arrived in the area, they had a different opinion, decided to stay, and encouraged others to join them. They called their new community Lindsdale.

Being of strong religious faith, many new settlers first met for church services in private homes, with the Lutheran church organized in 1884 and the Mission Friends in 1885. 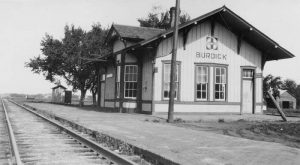 In 1887, the settlement became a station on the Strong City & Superior division of the Atchison, Topeka & Santa Fe Railroad. When a post office was established on August 29, 1887, the town’s name was changed to Burdick in honor of Ms. Burdick, the girlfriend of a Santa Fe Railroad official.

In 1889, the Lutherans built a church, and Mission Friends soon did the same. A Methodist church was organized in 1892, and its parishioners also built a church.

In the fall of 1889, Edwin Perrson, Burdick’s first postmaster, opened a store where Gary Hageburg now has his meat market. Many businesses were established during the next 35 years, including two mercantile stores, a drug store, a grocery store, a hat shop and a millinery store, doctor and dentist offices, restaurants, and a harness store. A school was also built a little west of the town. 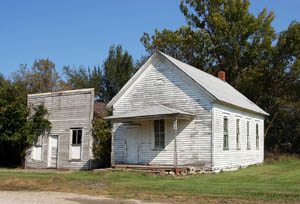 During the first two decades of the 20th century, Burdick attracted large crowds for rodeos, fairs, baseball games, displays of farm products, and other entertainment.

By 1910, the town had a population of about 225 people and boasted a bank, a money order post office, telegraph and express offices, and several churches.

In 1914 a fine brick building was built for the elementary school, and in 1921, in cooperation with Diamond Springs, a High School was built. The first graduating class of Diamond Valley Hight school was in 1923 with three students. That year, Burdick held its last fair, which had been so popular in previous years.

However, in the following decades, the population of Burdick would fall, and the high school closed its doors in 1957, at which time students went to school at Lincolnville in Marion County. The grade school continued into the 1960s, when those students were also sent to Lincolnville. Today the grade school building has been the home of the American Legion Post and serves as the center for community activities. 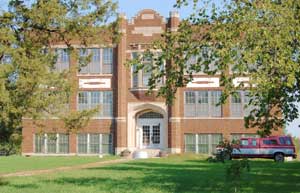 In 1996, the Atchison, Topeka, and Santa Fe Railway merged with Burlington Northern Railroad, but the railroad no longer runs through Burdick and the tracks have been removed.

Today, all that remains of the town are the Burdick Meat Locker, a family-owned business since 1921 that is known for its meat processing, beef jerky, and potato sausage; and the Burdick Oil Company, a family-owned gas station and ranch supply that celebrated its 70th anniversary in 2018. In addition, the Hebron Lutheran Church and the United Methodist Church are still active.

Though Burdick is an unincorporated community, it still maintains a post office and has a population of about 60. The area remains a farming and cattle ranch area. Burdick’s famous citizen is former Kansas Senator Nancy Landon Kassebaum-Baker. 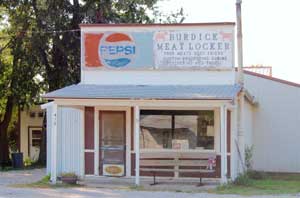