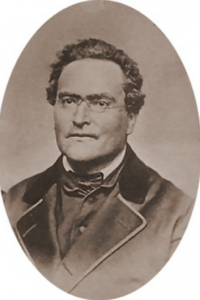 Christian Hoecken was an early Catholic Missionary who worked in Kansas.

Hoecken was born to Jacobus and Johanna Vermeer Hoeken in the Netherlands on February 28, 1808. The family was very religious, and Christian grew up to attend two Dutch catholic seminaries. He was ordained as a priest on March 20, 1832, and was sent to the United States to work among the Indians and strengthen the young catholic church overseas. He would never see his parents again.

Hoecken first settled at the Jesuit St. Stanislaus Seminary in Florissant, Missouri. In 1836, he was sent to Kansas to work as a missionary to the Kickapoo Indians. In the fall of 1837, he founded the Potawatomi Mission on Sugar Creek, in what is now Miami County, near the eastern line of the state.

He accompanied one of the first parties to the new mission and reservation on the Kansas River in 1847. He continued his labors until 1851, when he joined Father Pierre-Jean De Smet for missionary work among the Indian tribes farther up the Missouri River. During this venture, he worked among the Sioux, Gros Ventre, Arikaree, Mandan, and Assiniboine, of whom he reported to have baptized about 400 people.

While sailing back to St. Louis, Missouri, on board the steamboat St. Ange, he was inflicted with malaria and died on June 19, 1851. His body was encased in a cottonwood log, that had been hollowed out for the purpose, the seams sealed with pitch, and buried on the bank of the river. On the return trip, the rude coffin was exhumed and taken to St. Louis, Missouri, where the body was interred according to the rites of the Jesuit fathers.