Clayton, Kansas, is a semi-ghost town located primarily in Norton County but also in Decatur County. 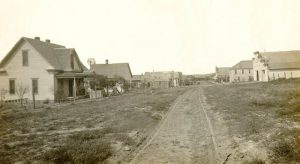 One of the first residents was E.L. Pease, who came here in 1878. Named for the valuable clay found in the area, a post office opened on March 31, 1879, with E.L. Pease as the postmaster. That same year, Frank Allman settled on a farm nearby. He used to drive a stage between points around Norton. Two more early residents included Frank J. Castle, from Galesburg, Illinois, who settled in the area with his brother Fred in 1884 to operate a horse ranch. The brothers were expert circus performers and had traveled for years before deciding to settle down in the Clayton area. At one point, Frank also ran the only store in town.

In 1887, the Kansas Town and Land Company was chartered to buy and sell lands on the right-of-way of the Chicago, Rock Island, and Pacific Railway, including land in the Clayton area. When the railroad came through, the town began to grow. 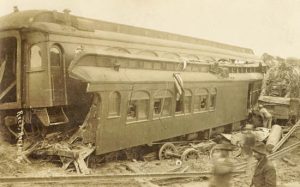 Clayton was incorporated as a city in 1907. By 1910, it had a bank, a weekly newspaper called the Vidette, a creamery, a feed mill, a hotel, a money order post office with three rural routes, express and telegraph offices, telephone connections, and 191 people. As the principal trading point for a rich agricultural district, it shipped large quantities of grain and livestock.

On September 23, 1910, a terrible train wreck occurred two miles west of Clayton. On the night before, a cloudburst carried out heavy fill over what was usually an almost dry creek bed. The heavy rains turned the creek into a torrent many yards wide and 22 feet deep and washed out nearly 1,000 feet of track.

The Chicago, Rock Island & Pacific train was traveling from St. Louis, Missouri to Denver, Colorado when it plunged through a 40-foot trestle into the creekbed below. The train, running at full speed, plunged into the gap with the engine and mail car going down into 20 feet of water. Many of the passengers in these two cars were almost instantly killed. Others were carried into the raging stream with the wreckage, and it was many hours before their bodies could be recovered. 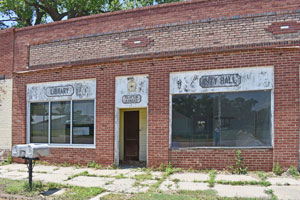 Passengers in the Pullman and another day coach, hurled from the berths and chairs by the shock, hurried out into the storm and rendered what aid they could to the injured, and extricated the mangled bodies of the dead. Others hurried to Clayton, where news of the accident was wired to division headquarters. Within half an hour, physicians and nurses and a wreck train were hurried to the scene from Norton, Colby, Goodland, and Phillipsburg. However, it was not until late this afternoon that the last bodies were recovered from the wreck. Members of the Topeka baseball team of the Western league were occupants of the Pullman but escaped injury on their way to Denver.

The first intimation that the engineer had of any danger came when he realized that the forward portion of the train was running in water which had spread out over the tracks near the fill. Reversing the engine checked the train’s speed, but not enough to prevent the engine, baggage car, and the smoker from remaining tilted on the earth bank. The chair car ripped its way into the smoker, smashing it to pieces and killing or injuring many passengers. The engineer and fireman and 18 passengers were reported killed, and about 20 were wounded. 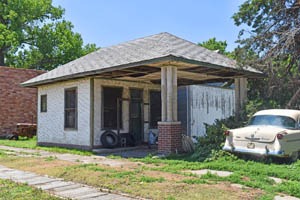 The original Clayton High School was located on the hill southeast of Clayton. The three-story brick building housed both the grade school and high school. In 1914, the first class graduated with five students.

In April 1923, the schoolhouse was destroyed by fire, probably due to a furnace explosion. A new high school was constructed on the west side of Clayton next to the Norton and Decatur County line. Clayton schools were closed through school unification, and the last graduating class was 1958 with four students. The building was torn down in 1960. Students now attend school in Norton. At some point, Clayton’s post office was also closed.

Clayton is now called home to about 55 people, and its former business buildings are shuttered and deteriorating. It is located about 17 17 miles southwest of Norton on Highway K383 south of Highway 36. 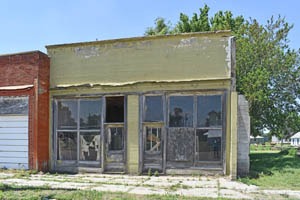 An old business building in Clayton, Kansas, by Kathy Alexander.