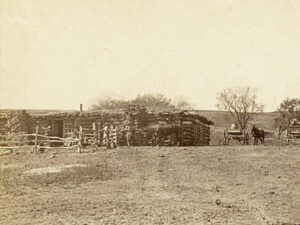 Clear Creek Kansas was settled in Ellsworth County, Kansas in 1860. It was located on Clear Creek north of the Smoky Hill River. The first settlers were S. D. Walker, C. L. and J. J. Prater, and Henry and Irwin Farris. Late in the same year, H. Wait and H. P. Spurgeon came to Ellsworth County, the former settling on Thompson’s Creek and the latter with the Walker party on Clear Creek.

In the summer Indian troubles began when a settler on Cow Creek and S. D. Walker of the Clear Creek settlement were killed. Fearing another attack, the settlers in the county took refuge at the stage station on the Smoky Hill Trail, where all the people of the surrounding country gathered. However, when they learned that the Indians were coming in great numbers they left for the east.

In June 1864, Lieutenant Allen Ellsworth and 40 men were stationed at Page’s old ranch on the Fort Riley-Fort Larned Road crossing of the Smokey Hill River. In July the troops built a blockhouse, and in July Samuel R. Curtis named it Fort Ellsworth. 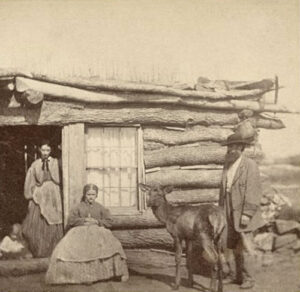 A family with a tame elk in Clear Creek, Kansas.