Delavan, Kansas, located in southwest Morris County, was founded in 1885 by Henry Kingman and named for his hometown of Delavan, Illinois.

A year later, the Topeka, Salina, and Western Railroad extended its tracks from Council Grove to a point just east of Delavan; however, the route was unused until the Missouri Pacific Railroad took over and completed the rail line to Colorado. The town grew slowly, becoming a minor trading center and shipping point for the rich agricultural neighborhood by the turn of the century. 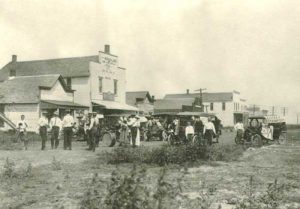 In 1910, it had a bank, a money order post office with one rural route, express and telegraph offices, Christian and Methodist churches, and a public school. At this time, it had a population of just 58 and was described as “one of the most progressive villages of its size in the state.” The town fared better in the early 20th Century, boasting a general store, lumber yard, farm machinery dealership, a bank, a telephone office, and both a grade school and a high school.

The Great Depression, however, took its toll on the small community, and the bank closed in the early 1930s. During World War II, the town got a boost when the Herington Army Airfield was established in 1942 at nearby Herington, Kansas, in adjacent Dickinson County, about seven miles west of Delavan. The Army airfield took some 14 months to build, putting several Delavan people to work. The base, however, closed just two years later, in 1945. The Delavan High School closed in 1950, and students were bussed to Wilsey for classes.

Delavan’s post office closed in 1992. All that remains of Delavan today is the Grandview Township Community Center, which once served as the Delavan Grade School, and some old rusting grain silos. Delavan is located about 17 miles west of Council Grove, Kansas, on U.S. Highway 56.