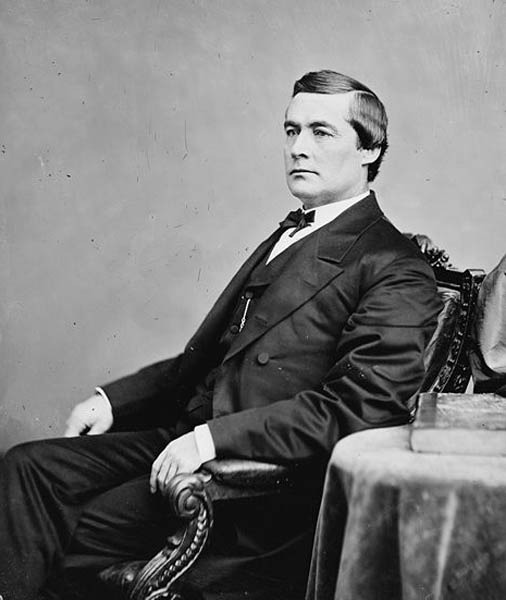 Ross was born in Ashland, Ohio on December 7, 1826. He attended public schools until he was 11 years old when he was apprenticed to the printer’s trade in the office of the Huron Commercial-Advertiser. He completed his apprenticeship at Sandusky, Ohio, and then spent several years traveling as a journeyman printer. On his return to Sandusky in October 1878, he married Fannie M. Lathrop and went to Milwaukee, Wisconsin, where he was engaged in newspaper work.

The Sacking of Lawrence, Kansas in May 1856, aroused a storm of indignation throughout the northern states. A meeting was held at Milwaukee and a fund of $3,000 was raised to arm and equip a party of Free-State men for Kansas. This party came overland under the leadership of Edmund Ross and upon arrival at Topeka at once took the field with the anti-slavery forces.

After the invaders had been driven out, Ross entered into a partnership with his brother in the publication of the Kansas Tribune at Topeka. He took an active interest in politics, was a member of the Wyandotte Constitutional Convention in 1859, and at the close of the convention began the publication of the Kansas State Record at Topeka, which was devoted to the interests of the Republican Party and was influential in turning the tide of public opinion toward the adoption of the new constitution. In 1860, his paper aided in calling a Territorial Convention to plan a scheme for securing a practical railroad system for the anticipated State of Kansas.

During the Civil War, he assisted in raising the Eleventh Kansas Infantry in 1862, and at the organization of the regiment was elected captain of a company. Subsequently, Governor Thomas Carney appointed him major of the regiment, when it was changed from infantry to cavalry. He was present with his command in all the battles in which it was engaged. In 1865, Governor Samuel Crawford appointed him Aide-de-camp with the rank of Lieutenant-Colonel.

At the close of the war, he became editor of the Kansas Tribune at Lawrence. On July 25, 1866, Governor Crawford appointed him United States Senator to fill the vacancy caused by the death of General James H. Lane, and at the following session of the legislature, he was elected for the unexpired term. 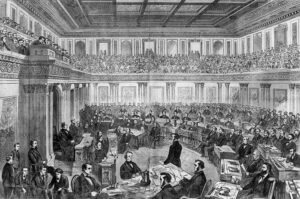 He was one of the young Republican members of the Senate, and up to the time of the impeachment proceedings against President Andrew Johnson, was always in accord with his party. In that celebrated case, he incurred the lasting displeasure of some of the president’s enemies by casting the deciding vote against impeachment. His action was denounced by the partisan press, his friends turned against him, he was ostracized and insulted, and it was not until years afterward, when the sectional feeling had died away to some extent, that Ross was accorded justice. The Chicago Times of August 25, 1889, said: “Though the Republican Senators, who disappointed the Republican managers of their two-thirds vote and thus saved Johnson and the country, lost their place in consequence, as soon as their time expired and never since, except in the case of Ross, have had public employment. Not one of them, it is safe to say, regrets his course. It was judicious, courageous, and disinterested. These men saved the country from the commission of a colossal blunder.”

Ross was one of the Liberal Republican leaders in 1872 who opposed the nomination of Ulysses S. Grant and favored Horace Greeley for the presidency. On his retirement from the Senate, he began to publish a paper at Coffeyville, but a tornado destroyed his office and he became associated with the Spirit of Kansas and the Standard of Lawrence.

In 1882 he went to New Mexico and for a time edited a paper in Albuquerque He was appointed governor of the territory by President Grover Cleveland in 1885, which position he held for four years. Ross continued to live in Albuquerque until his death on May 9, 1907.