Elmo, Kansas, in Banner Township of Dickinson County, was first located about a mile from its current location. A post office opened on December 16, 1884. 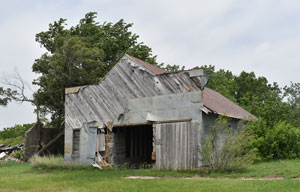 However, when the Missouri Pacific Railroad came through the area, it bypassed the town because it was situated on sloping ground. Instead, it built a station in nearby Banner City. The Elmo post office was moved to Banner City in about 1887. The former town never had a post office.

In 1910, Elmo was described as a thriving little town. At that time, it had a bank, a grain elevator, a money order post office with one rural route, express and telegraph offices, telephone connections, Catholic and Methodist churches, several well-stocked stores, a hotel, and a population of 225. It shipped considerable quantities of agricultural products.

However, in the next decades, its population declined. The post office closed on May 6, 1966, and the railroad was removed in the 1990s.

Today, there are a few scattered homes, an abandoned industrial building, what appears to have been a large oil tank, a church, and building ruins. 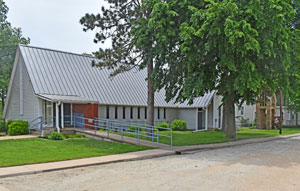