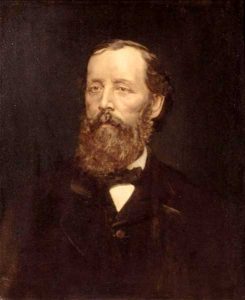 Henry Joseph Adams, a lawyer, Free-State advocate, politician, and soldier, was born at Rodman, New York on February 10, 1816. He was educated in the public schools, spent a short time at Oberlin College, in Ohio, then read law and graduated from the Cincinnati Law School.

He came to Kansas in March 1855 and during the summer located at Lawrence. The next winter he was elected a member of the senate of the Free-State Legislature, and from that time on, took an active part in public affairs. In the spring of 1857, Adams was elected the first free-state mayor of Leavenworth and served two terms. During the session of 1858, the Territorial Legislature made him chairman of the committee to investigate the Oxford, Kickapoo, and other election frauds. He took a prominent part in the Leavenworth Constitutional Convention and under that constitution, was elected governor, but as Congress failed to admit Kansas as a state, he was never installed in office. Before the convention in 1858, Adams received an equal vote with Marcus J. Parrott for delegate in Congress, but Parrott was declared the nominee and was elected.

Under an act passed by the legislature of 1859, Adams was appointed a member of a committee with Judge S. A. Kingman and F. S. Hoogland, to audit the claims against the United States government, for losses sustained by citizens of Kansas in the Kansas-Missouri Border War. Next to Governor Charles Robinson, he was the most popular candidate before the Republican convention which nominated the first governor of the state. Soon after the outbreak of the Civil War he was appointed paymaster of the army and served in that capacity until the close of hostilities. He died at Waterville, Kansas on June 2, 1870.