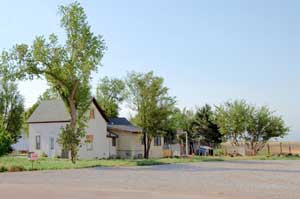 Though the town was never as big as others that have long gone extinct, such as Appomattox or Zionville, it remains populated today. The Atchison, Topeka & Santa Fe Railroad barreled through the small town in the early 20th Century, which was probably the reason for its existence. The town has no open retail businesses but two large grain elevators tower above Highway 160 on both sides. Somewhere along the line, the Cimarron Valley Railroad took over the tracks of the Atchison, Topeka & Santa Fe Railroad, and the trains continue to operate through the town. Several small homes are scattered about the small town, as well as a number of buildings that appear to have held businesses at one time. Hickok never had a post office.

The Santa Fe Trail passed about 7 ½ miles south of Hickok and its location is designated with a Daughters of the American Revolution marker. To reach the marker travel south off Highway 160 on Road R, six miles to Road 19, then west 1 ½ miles. The marker sits on the north side of the road. 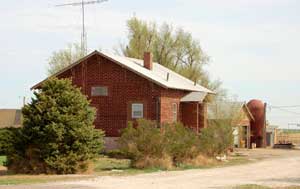 West of Hickok on the south side of Highway 160 is a residence that once served as a grade school. The school was built in 1935 and serviced area students before they were old enough to go to high school, at which time, they were bussed to Ulysses. Behind the building, a brick outhouse and playground equipment still stand. The school probably continued to operate until Red Rock Elementary School was built about three miles to the east of Hickok. It too has long been shuttered, and the site now serves as an event venue.

Hickok is about seven miles east of Ulysses.