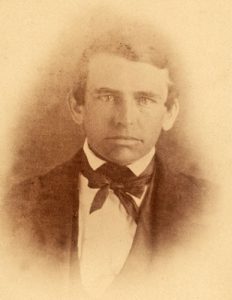 Hugh Sleight Walsh was Secretary and acting Governor of the Territory of Kansas.

Walsh was born in New Windsor, New York on November 10, 1810. He was educated in his native state, then went to Alabama, and came to Kansas in 1857. He served as private secretary to Governors Stanton and James Denver.  In the spring of 1858 he was appointed Secretary of the Territory, entering upon the duties of that office on May 12th. When Governor Denver resigned in the following October, Walsh served as governor until the arrival of Governor Samuel Medary in December.

He was particularly active in aiding the border ruffians in their efforts to suppress Captain James Montgomery and his company in southeastern Kansas. Walsh took a keen interest in state politics, and while positive in his opinion and always ready to defend his views, he was never abusive toward his political opponents.

In June 1860 he retired from the secretary’s office and engaged in farming near Grantville, Kansas, where he lived with his son De Witt until his death on April 23, 1877.