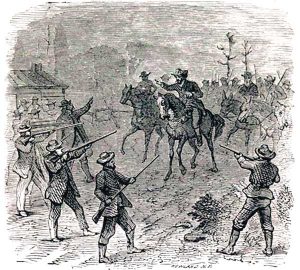 Jacob Branson was a Free-State supporter during the days of Bleeding Kansas.

One of the early settlers of Douglas County, Kansas, Branson settled at Hickory Point, about 10 miles south of Lawrence on the old Santa Fe Trail. It was a very beautiful tract of land, part heavy timber, and the rest fertile prairie. Many of the early settlers came from Indiana, some of whom took claims and returned to the east temporarily. Others never returned. Missourians and new settlers took up these abandoned claims and sometimes laid claim to others which were afterward resumed by the original settlers.

Jacob Branson, who was the leader of the Free-State men in the area, encouraged like-minded men to settle at Hickory Point and the pro-slavery advocates endeavored to get as many men of their faction to settle close to them. Most of the difficulties in Kansas during the territorial period arose over the question of slavery, but disputes about claims in many cases precipitated the quarrels. The antagonistic elements brought into daily conflict could not long remain without open violence; one of the most serious occurrences of this kind taking place at Hickory Point. A man named Franklin Coleman was among the second claimants at Hickory Point and a dispute arose between him and Charles W. Dow, who had also settled on an unoccupied claim.

Coleman was prominent in the neighborhood as a pro-slavery man, while Dow lived with Branson, the acknowledged leader of the Free-State party in the Wakarusa District. Coleman trespassed on Dow’s claim and was warned that he must stop. The feeling between the two men was rapidly tending toward a crisis, when on the morning of November 21, 1855, Dow met Coleman and some other pro-slavery men, among them Buckley and Hargus, at the blacksmith shop at Hickory Point. They denounced Dow and unfortunately, Dow and Coleman met on the road going toward Dow’s claim. 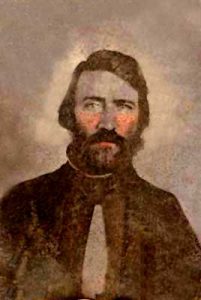 Dow left Coleman at his claim and just after he passed up the road Coleman fired at him. When the gun misfired, Dow begged for mercy but Coleman shot him and he died in the road. Immediately, Coleman started for Westport, Missouri to give himself up to the governor, but not finding him, surrendered to Samuel J. Jones, the sheriff of Douglas County, who was a friend of the pro-slavery party. After Dow’s funeral, the settlers of Hickory Point held a meeting, when resolutions of condolence were passed and a committee was appointed to take steps toward bringing the murderer to justice. At this meeting, Branson advocated radical measures with regard to Coleman and his companions, Buckley and Hargus. Sheriff Jones, in the meantime, was on his way to Lecompton with his prisoner, but on the way was met by some of Coleman’s neighbors. Buckley told of the threats made against him by Branson and the sheriff concluded to make another arrest. A warrant was sworn out by Buckley who said that he feared for his life. Justice Cameron issued a peace warrant for the arrest of Branson. It seems that the pro-slavery party expected the Free-State men would attempt to rescue Branson, but believed they would do so in Lawrence after the prisoner was taken there, under which circumstances there would be an excellent excuse for assaulting that stronghold of the abolitionists.

Armed with this warrant and accompanied by Buckley and some 15 pro-slavery men, Jones went to Branson’s house on the evening of November 26 and arrested him. This posse had been met before they served the writ by Samuel F. Tappan of Lawrence, a Free-State man, who learned of their mission, and immediately informed Branson’s friends of the intended arrest; a young man who lived at Branson’s also aroused the neighbors as soon as Jones and his party left. The sheriff with the posse did not ride at once toward Lawrence so that considerable time elapsed before they started north.

In the meantime, the friends of Branson were aroused and planned his rescue. Phillips, in his Conquest of Kansas, said,  “the intention was to have Branson rescued in Lawrence,” but Tappan and the young man who had left Branson’s had both been busy; about 14 of the Free-State men were gathered at Abbott’s house near which the posse would have to pass on the way to Lawrence. They had gathered so quickly and Jones was so slow that for a time, the party at Abbott’s began to think they had taken a different road or gone to Lecompton when the alarm was given by the guard on the road. The party in the Abbott house rushed out and Jones attempted to evade them by going off the road. This was prevented by the Free-State men spreading out.

Jones demanded what was the matter, to which the Free-State men replied that was just what they wanted to know. The Free-State men told Branson to ride over to them, which he did; both sides declared that they would shoot but neither did. Jones tried in every way to induce the Free-State men to give Branson up, but this they refused to do. Finding that nothing availed but to fight, and not being willing to shed blood, Jones was obliged to leave Branson in the hands of his friends and returned to Franklin. 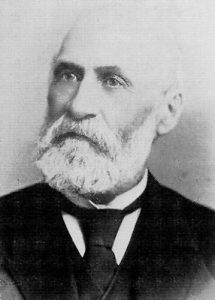 The numerical strength of the contestants in this bloodless encounter was about equal, as it is estimated that there were about 15 men on each side. Later in the night the rescuing party having been augmented by a few men, rode into Lawrence, where they told of the threats Jones had made against the abolitionists of Lawrence. The arrest of Branson was both violent and irregular and it is doubtful whether any legal officer would have sustained the arrest had the rescue been questioned. There were only three Lawrence men concerned in the rescue, and Charles Robinson saw that it would not do for the city to take any action in the rescue or harbor the rescuers.

A meeting of the citizens of Lawrence was called and Mrs. Robinson in writing of it said,

“Mr. Branson said at the meeting that he had requested to leave Lawrence, that no semblance of an excuse existed for the enemy to attack the town, with tears streaming down his weather-beaten cheeks he offered to go home and die there and be buried by his friend.”

To this, the Free-State citizens would not hear but after the Wakarusa camp was established, Tappan, Wood, and Branson moved there as a precautionary measure, as Wood had taken such a prominent part in the rescue.