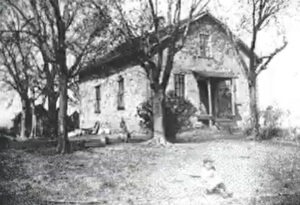 When the settlement was founded in October 1853, it was a pro-slavery stronghold during the days of Territorial Kansas. Situated between the Kansas River and Wakarusa River, it was one of the county’s oldest settlements and Indian trading posts and the first stage stop west of Westport (now part of Kansas City, Missouri .)

When Kansas was opened to settlement in 1854, several Missourians moved to Franklin, further strengthening its pro-slavery stance. In 1855, Franklin received a post office. Situated so closely to Lawrence, the “unofficial” Free State capital, the settlers were constantly in conflict. Two battles were fought near here in 1856 — the Battle of Franklin in June and the Battle of Fort Saunders in August. Several minor skirmishes continued through the fall, but afterward, the pro-slave forces began to leave. 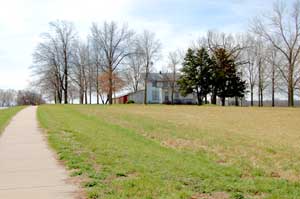 In 1857, the town was officially incorporated, a ferry was established on the Kansas River north of town, and Dr. R.L. Williams opened a general store.

During the Lawrence Massacre of August 1863, there was such a demand for houses that many of the dwellings in Franklin were moved to Lawrence. After the Civil War, Franklin dramatically declined. The post office closed its doors in 1867, and the entire townsite eventually was owned by Dr. R.L. Williams, who farmed the area for several years.

The old townsite of Franklin is today but a suburb of Lawrence. However, it must have had some development in later years, as the one street in the old town is lined with an old sidewalk. 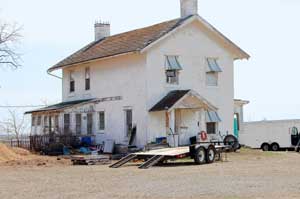 An old homestead appears to be utilized for construction purposes, Kathy Alexander.