Jarbalo, Kansas, is a very small town in Leavenworth County. Because it no longer has a post office, it is officially an extinct town today.

Before the town was established, General Albert Sydney Johnston, commander at Fort Leavenworth, had four covered bridges constructed to replace fords across Stranger Creek that hindered wagons traveling to and from the camp. At a cost of about $1,500 each, one of those bridges was located near where Jarbalo would later be established. 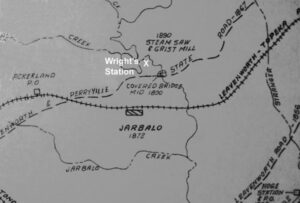 At this time only settlement that existed in the area was known as Wright’s Station, located about 2.2 miles northwest of Jarbalo’s current position. Here was a store with a post office, to which the mail was brought from Leavenworth by horseback, and the settlers could pick up their mail while shopping for groceries.

John Wright owned a saw and grist mill just north of the covered bridge between the years 1856 and 1861. It was one of the busiest places in that section of the county. People for miles around brought their corn to be ground and their logs to be sawed into plans for their cabins. Unfortunately, a terrible explosion occurred on February 1, 1861. At that time, John Wright had just completed fixing a belt and was in the act of placing it in position when the explosion occurred. He was thrown about ten feet and landed among some logs but was not seriously hurt. Harrison Waymire and R.B. Richards were caught in the main belt and hurled quite a distance against a tree and seriously injured. Eight people were killed, several others were wounded, and the mill was completely wrecked. The lifeless body of one man was almost completely stripped of his clothing. Others were torn into fragments and pieces of human flesh and parts of machinery were scattered for nearly half a mile around. The miller and engineer and several prominent citizens were among those that died. It is believed that water was allowed to freeze in the boiler and loosen some of the flues and when steam was raised the explosion occurred. The mill was east of the future site of Jarbalo.

In 1868 the United States Government offered land on the Delaware Preserve to the Union Pacific Railroad and then allowed settlers to purchase the property. 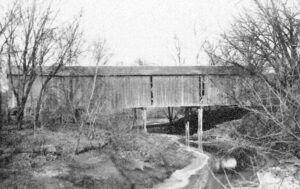 At that time Isaiah Lowe made a large purchase in Tonganoxie Township and authorized the new Leavenworth, Topeka, and Southwestern Railroad in a joint operation with the Union Pacific Railroad, to come through the area. In 1871, the Stranger Valley School was built. This building also served as a community as a meeting place, for the local church, and for the Stranger Valley Grange No.11 (an agriculturally-centered fraternal organization).

In 1879, Samuel H. Hill settled in Jarbalo and operated a sawmill on Stranger Creek for six and a half years before buying the store in Ackerland.

In 1883, Lowe platted four blocks of lots in the southeast corner of his property and the village of Jarbalo was born. Early on, various grain mills began operating in the area and a grain elevator was built on the north side of town just by the railroad tracks. Soon, the first commercial and public structures were constructed. Other early businesses included Dr. Mount’s medical practice, a blacksmith’s shop run by a Mr. Jeffries, and a large general store owned by Uriah M. Morgan which also served as the town’s earliest recorded post office. 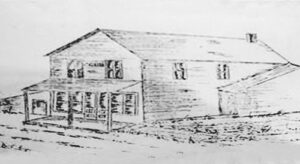 By 1899 the railway had been contracted by the Atchison, Topeka & Santa Fe Railroad and enjoyed further success.

In 1905, a large two-story building was sold to the Stranger Valley Grange by Mr. William Willis. The second story served as the Grange Hall and was put to use for town meetings, dances, and performances. The lower level was rented, holding various businesses including a general store and the post office

More buildings would be erected and various businesses opened in the next years.

The Jarbalo State Bank began operation in 1906. Ten years later, the bank made headlines when it was robbed in July 1916. However, the newspaper headlines varied with reports of the amount stolen ranging from $215 to $1,760. The stores also couldn’t agree on whether there were one robbers or two. In any case, the criminals were never apprehended.

By 1907, the old 1971 schoolhouse had been moved to a location closer to the railroad tracks and became a restaurant called “The Beanery.” In the meantime, a new grade school had been built on the original location. 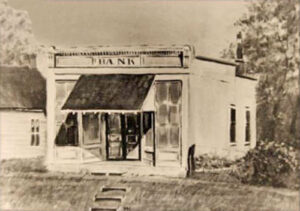 In 1910, Jarbalo was situated on the Leavenworth & Topeka Railroad and was the shipping and supply station for a rich agricultural district. At that time, it had a money order post office, general stores, agricultural implements house, express office, and a population of 100.

The Opliger store was opened in 1913 by Sam Opliger, which functioned as a grocery store and fueling station, selling Standard Oil in gas tanks until a pump was installed in 1918.

In 1917 the first high school building was built and opened during the 1917-18 school year. Heralded as the first rural high school in the county, it was a small, but prominent building with a basement and a small gymnasium. Football games were held in a cleared-out lot north of the town just beyond the railroad.

In the 1930s, the old covered bridge that stood along Stranger Creek was torn down and soon replaced with a concrete bridge.

1931, the Leavenworth and Topeka Railroad failed and the track was sold to the Sonken-Galamba Corporation in Kansas City, which had the line junked and sold to the Burlington Railroad. Losing its shipping point, was a blow to the city. Making matters worse, Randel Trackwell decided to quit running his store in Grange Hall sometime during the mid-1930s. The post office was moved one final time to the Vigus Garage on the southwest side of town with Mrs. Nina Vigus serving as postmistress.

Unfortunately, Jarbalo struggled like many other Kansas towns in the 1930s. In 1940, the bank merged with the City State Bank in Leavenworth, and the building became a residence.

In 1945, the 1871 schoolhouse that had become a restaurant burned down. 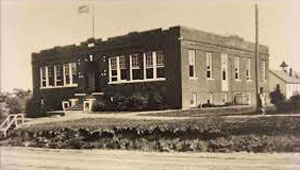 In 1947, Dohrn’s Service was established by Carl and Katherine Dohrn. This building had a long history of various businesses. It began as the “Do Drop Inn,” owned by the Somers family. Next, it was owned by the Naylor family who enlarged it and operated a grocery store and restaurant. It was then owned by the Throops, before it was sold to the Dohrns.

In 1957, the original church was torn down and replaced by a new building.

Jarbalo’s post office closed on December 31, 1858, at which point it began receiving its mail by rural route from Leavenworth.

In the next decade, a series of harsh June tornados ripped through eastern Kansas, hitting not only Jarbalo, but Topeka, Olathe, Valley Falls, Wakefield, Manhattan, and others.

In 1966, Jarbalo lost the original Opliger Store, the Dohrn store, and many homes were damaged.

“We watched it go over. It was a little bit to the south of our dairy up there, and it swung around and went through Charlie Woods… and it went right through Jarbalo. It took out one of the grocery stores… One of the trailer houses was wrapped around a telephone pole.” 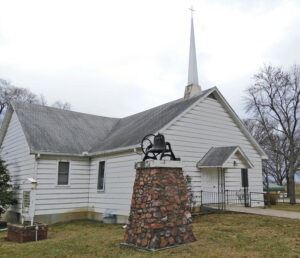 The final blow to Jarbalo was in 1968 when it was announced that the Jarbalo School District was to be consolidated with the Tonganoxie District. While many students began riding the bus to Tonganoxie, other families moved.

Afterward, all remaining businesses in Jarbalo closed. The last to shut its doors was the Opliger Grocery Store in 1974.

There are still several homes, named streets, and the Jarbalo Community Bible Church in the community.