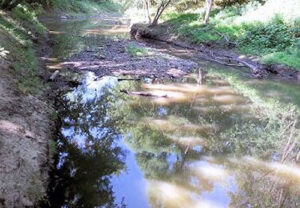 The majority of Stranger Creek lies within Leavenworth County, Kansas, and is composed mostly surrounded by vacant and agricultural land.

The creek was named for its tendency to wander and meander like a stranger.

Stranger Creek enters the county by way of Easton Township, flows in a generally southerly direction through Alexandria Township, the southwest corner of High Prairie, through Stranger and Sherman Townships, and empties into the Kansas River. Its tributaries, the Little Stranger, Tonganoxie, and Nine Mile Creeks, drain much of the territory further east and southwest. Kickapoo, High Prairie, Leavenworth, and Delaware Townships, in the northeastern part of the county, are also drained by multitudes of smaller streams flowing into the Missouri River.

In 1858, General Albert Sydney Johnston, commander at Fort Leavenworth, Kansas had four covered bridges constructed to replace fords across Stranger Creek that hindered wagons traveling to and from the camp. General Johnston appointed John O’Brien as superintendent for the project. The bridges, constructed at Easton, Farmington, Jarbalo, and Springdale, cost about $1,500 each. The bridges at Easton, Farmington, and Jarbalo were all removed in the 1930s leaving only the one at Springdale. 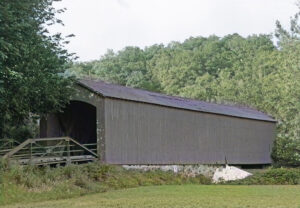 The 1954 Leavenworth County Highway Map shows that the Springdale bridge was on an earlier alignment of the main road southeast of the current crossing. The Springdale Bridge was bypassed in 1932. After being abandoned for a few years, the State Highway Commission started a restoration project in 1946. The bridge received a new roof and siding. However, on September 21, 1958, the bridge was struck by lightning and burned.