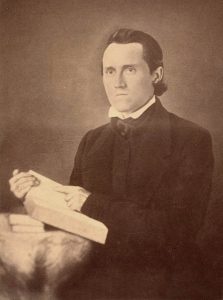 Jotham Meeker was an Indian missionary in Kansas and other states.

Mekker was born in Xenia, Ohio on November 8, 1804. His boyhood was spent on a farm, after which he learned the printer’s trade. He then joined Reverend Isaac McCoy in mission work among the Indians, beginning his career as a missionary among the Potawatomie at Carey, Michigan in 1825. Two years later he was sent to the Ottawa Mission at Thomas, Michigan, and while there he devised a system of applying the English alphabet to the phonetic spelling of Native Amerian words, which greatly simplified the work of the mission teacher.

In 1833, at the suggestion of Mr. McCoy, he came to Kansas with an old-fashioned hand printing press — the first ever brought to Kansas — for the purpose of printing books in the Indian language. The first one of these was known as the Delaware First Book. Copies of several of the books thus printed by Meeker are now in the possession of the Kansas State Historical Society.

He died at the Ottawa Mission in Kansas, in January 1855.