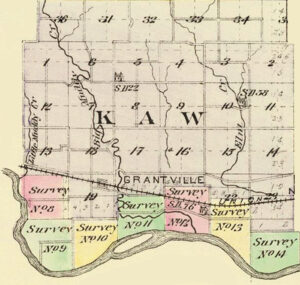 Kaw City, Kansas is an extinct town in Jefferson County.

In the spring of 1857 a town company of 25 members was formed, and a townsite, consisting of 320 acres, was laid off in Kaw Township and called Kaw City. Its location was on the east side of Big Muddy Creek, at the base of the hills, at the place where the wide valley of the Kansas River begins.

The first services of the Methodist Episcopal Church in the county were held in Kaw City.  A post office was established on April 30, 1858, with James H. Jones appointed postmaster. Though attempts were made to build up the town, it did not grow.

In late 1865, when the Kansas Pacific Railroad was approaching completion, the Kaw City station was built on the farm of D. W. Kleinhans about one and one-half miles from Kaw City. The first regular passenger train came through on January 1, 1866. The post office was moved to the new site in October 1866 and David Devore was appointed Postmaster. Soon Mr. Kleinhans laid off a town at the station, and the name was changed to Grantville, after which the Kaw City townsite was abandoned. The land was soon covered with productive farms.