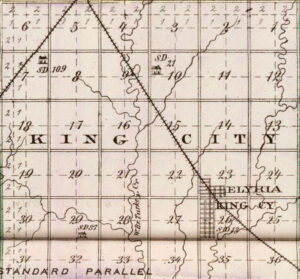 In the spring of 1871, a colony from Ashtabula County, Ohio, settled in the southern part of McPherson County, Kansas, and established King City.

In January 1871, E. L. King, president; John W. Hill, vice-president; J. U. Fellows, secretary; and J. R. Williams, treasurer, organized the colony in Ashtabula, Ohio, to locate a town in Kansas. E. L. King, John W. Hill, and Smith Edwards were appointed to a locating committee. They traveled 1000 miles over the state and were returning homeward without choosing a site when they came into McPherson County and decided upon the location of King City. The locating committee returned to Ohio, and about the last of May, the president of the company and about 25 others started for Kansas. By June 1872, the town contained 25 houses.

When the first settlers arrived, they set up a camp, living in tents, covered wagon boxes, and shanties.

Some early settlers included Albert G. Smith and Mr. Gilotte, who ran a breaking outfit; Jack Thomas, William Nelson, who operated a brickyard and boarding house; and George Crissy, who established the first store selling groceries and provisions. Across the street from Crissy’s store, R. O’Dell built a hotel, and across the way from the hotel, D. B. Hoisington had his blacksmith shop. Dr. S. S. Gregg held forth as a physician in a little office next to the blacksmith shop. These were all the buildings on Main Street in 1871. A post office was established on July 10, 1871.

South was another hotel built by William West and Fred. Albright. L. N. Holmberg moved a building into King City, and he, with S. E. Granger, soon started a good general store. Charles Anderson followed with a few groceries and agricultural implements. After a time, John W. Hill and H. A. Hendry built a large store and put in a stock of drugs and medicines. Overhead was the public hall in which Harvey Williams organized the first Sunday school and in which the village school was also taught. Old Father Shelly used to preach in William West’s hotel once every two weeks.

Showing early promise, it is probable that if two tiers of townships had not been taken from the southern part of the county, King City would have obtained the county seat. However, McPherson was made the seat of justice in 1873. Though King City did not continue to grow, it was officially laid out by County Surveyor J. D. Chamberlain in February 1875.

After “the county seat moved to McPherson Centre, King City fell to pieces.”