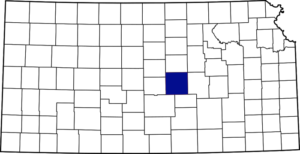 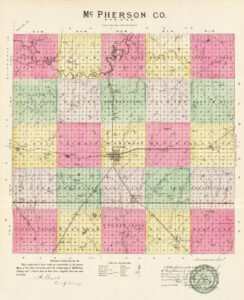 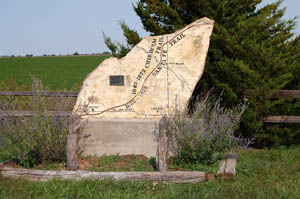 The general surface of the county is a rolling prairie, somewhat broken in the north and level in the central part. In its early history, bottomlands comprised seven percent of the total area, averaging from one-half to one mile in width. The timber belts along the streams were a few rods in width and contained cottonwood, box-elder, ash, oak, mulberry, hackberry, coffee bean, and willow. The Little Arkansas River crosses the southwestern corner, and the Smoky Hill River flows through the northwestern section. Several fair-sized creeks were Sharp’s, Gypsum, Blaze, Turkey, Black Kettle, Emma, and Crooked. Limestone, sandstone, and gypsum were abundant.

From the 1820s to the 1870s, the Santa Fe Trail passed through McPherson County. The trail entered east of Canton, south of Galva, north of Inman, and west towards Lyons.

In 1855, Charles O. Fuller established a ranch adjacent to the Running Turkey Creek Crossing about two miles south and one mile east of Galva. Fuller’s Ranch provided accommodations for travelers on the Santa Fe Trail and was probably the first white settlement in McPherson County. Charles Fuller kept it.

The first settler was Isaac Sharp, who took a claim in the winter of 1860 on the creek which bears his name. He brought with him his father and mother from Pennsylvania. Mrs. Sharp died and was buried on the creek. Sharp trapped, hunted, and traded with the Indians. When the Civil War broke out and the Indians became troublesome, he moved to Council Grove. Afterward, there were no settlements of any consequence for several years, although trappers and traders visited the county. 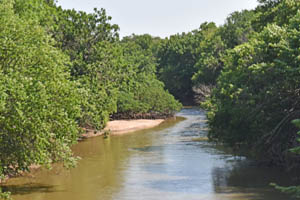 Peketon County was established in 1860 and contained all the territory in Kansas west of the 6th principal meridian and south of Township 16. On February 17, 1865, Peketon County was abolished, and McPherson County was made a part of Marion County, which extended from the west line of Chase County to the present western boundary of Kansas.

A man named Lewis located a claim on the Smoky Hill River, which he improved to some extent. A man named Peters settled on Sharp’s Creek but died shortly afterward. A man named Wheeler built a stone corral at the crossing of the Santa Fe Trail over the Little Arkansas River in 1865. The following year Colonel Grierson with the Seventh Kansas Cavalry encamped with his troops at this place. They built a stockade of cottonwood logs for a headquarters and put up huts to live in.

In 1867 the Pawnee Indians raided Gypsum Creek, murdered a man by the name of Temple, and hid his body in a ravine. The Osage raided the vicinity of Sharp’s Creek the next year and carried off Mrs. Bassett and a child a few days old. The woman was too weak to ride a horse, so she was left on the open prairie, where she and her baby were later found by the search party in a pathetic condition. The baby died from exposure. 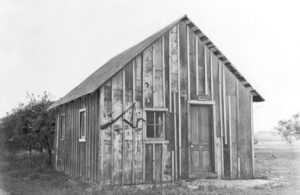 The year 1868 saw the advent of several colonies of Swedes. One colony purchased 13,000 acres of the Kansas Pacific Railroad company in the vicinity of the present town of Marquette and settled on it. The Chicago Swedish company made heavy purchases, especially along the Smoky Hill River and located in the town of Lindsborg. Other smaller colonies settled in different parts of the county.

In 1868, Solomon Stephens and L. N. Holmberg were appointed Justices of the Peace — the first officers in McPherson County. In 1869 the first election for McPherson Township was held. McPherson was organized as a county in the spring of 1870 at a meeting in Sweadal. The population at that time was 738. Sweadal, located about one mile and a half southwest of the present site of Lindsborg, was selected as the county seat. However, the County Commissioners resolved to meet in McPherson in September.

In 1871 the Ashtabula Colony, the officers of which traveled nearly all over Kansas in search of a location, came to McPherson County and settled in King City Township. They founded the town of King City, which was at one time a serious rival of McPherson for the county seat, but is now extinct. The colony took its name from Ashtabula, Ohio.

The town of McPherson was laid out and surveyed in June 1872 by the McPherson Town Company; J. R. Fisher was President, and L. G. Skencke, Secretary.

In February 1873, a colony from Ashland, Kentucky, located three miles east of McPherson. They hauled the timber for their houses from Salina. In September 1873, the first Mennonite settlement was made in the county; they bought a large amount of land from the Atchison, Topeka & Santa Fe Railroad Company and made many purchases from homesteaders.

In April 1873, a petition for relocation of the county seat was filed. In May, the McPherson Town Company had offered, as an inducement for the location of the county seat at this point, the free use of rooms for ten years and the donation of two squares of land on the town site. At the election on June 10, 1873, McPherson received 605 votes, New Gottland 325, King City 3, and Lindsborg 1. The McPherson Town Company’s offer was accepted, and the County Commissioners selected blocks 56 and 65. The town company then erected a two-story frame courthouse, which was used for ten years when a large stone structure was built. Thus the county seat was established at McPherson and has remained since.

That winter after the grasshopper disaster of 1874, the grangers of McPherson County asked the government for rations for 10,000 people for six months, 10,000 blankets, and 10,000 of each article of clothing. T. D. Wickersham, the promoter of this request, helped distribute the goods and got into serious trouble for the supposed theft of money and supplies. Wickersham was an ill-starred name in McPherson County, a James Wickersham having fled the country in 1870 to escape lynching, and another James Wickersham having been shot, but not killed, by James Abercrombie in 1876. In 1875 the sum of $3,300 was stolen from the county, with no safe place for the treasurer to keep the funds collected.

June 17, 1876, a terrible wind storm, or cyclone, passed over the northern part of the county; several houses were blown down, and several people were injured, but none were killed. Large trees were twisted off or uprooted where it crossed the Smoky Hill River. 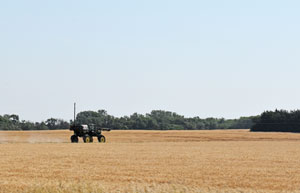 In 1877, McPherson was the foremost county in the state in agricultural products, and a great celebration, attended by 5,000 people, was held at the county seat. Although agitation for railroads had been going on since 1872, these products were still being marketed at Salina and other towns outside the county.

In 1878, McPherson County reported 72 schoolhouses and not one saloon.

As early as 1875, city leaders of Marion held a meeting to consider a branch railroad from Florence. In 1878, the Atchison, Topeka & Santa Fe Railroad and parties from Marion and McPherson Counties chartered the Marion and McPherson Railway Company. In 1879, a branch line was built from Florence to McPherson. In 1880 it was extended to Lyons, and in 1881 it was extended to Ellinwood. The Atchison, Topeka & Santa Fe Railroad leased and operated the line. The original branch line connected Florence, Marion, Canada, Hillsboro, Lehigh, Canton, Galva, McPherson, Conway, Windom, Little River, Mitchell, Lyons, and Chase, then connected with the original main line at Ellinwood. 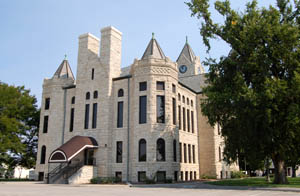 The National Old Trails Road, also known as the Ocean-to-Ocean Highway, was established in 1912 and was routed through Windom, Conway, and McPherson. 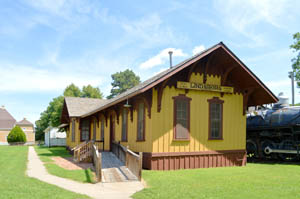 The Santa Fe Trail Across Kansas