Lindsborg, Kansas, located in north-central McPherson County, got its start in the spring of 1869 when it was settled by a group of Swedish immigrants.

At this time and for the decades previous, many Swedes had immigrated to the United States and wrote letters home to their countrymen, persuading others to come. One factor in promoting Swedish immigration to Kansas was the organization of land companies by Swedes.

“It is undeniable beyond any doubt that Kansas is a paradise.” 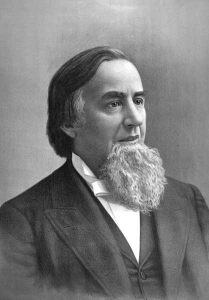 The year 1868 witnessed the organization of two companies whose activities that were decisive in creating the large Swedish element in southern Saline and northern McPherson counties with Lindsborg as the center. These folks had come from the Värmland province of Sweden led by Pastor Olof Olsson. They envisioned a community rich in culture, learning, religion, business, and farming. The First Swedish Agricultural Company of McPherson County was organized in Chicago, Illinois on April 17, 1868, and in August, the Chicago Swedish Company sent agents to McPherson County to purchase land. Soon, they purchased 13,168 acres from the Kansas Pacific Railroad in McPherson and Saline Counties and the site of Lindsborg was located at a place that provided excellent farming ground and the Smoky Hill River passing through that would provide good water.

The city’s Swedish-language name means Linden Castle in English and was named for three men who held prominent positions in a Chicago organization of Swedish farmers.

One of the first settlers in the area was N. P. Swenson who located just west of the present town and started in a blacksmith shop. The first building erected upon the townsite was the company’s house, in which religious services were held and the county’s business transacted. The first house erected on the townsite was built by Neils Olson 1869. The same year J. H. Johnson opened the first store, about a mile west of Lindsborg, where a post office was established in December 1869, with Johnson serving as postmaster. The next year, the Swedish Merchant’s Association bought out Mr. Johnson and moved the building and the store to the townsite of Lindsborg. The Swedish Lutheran (Bethany Church) was organized in 1869, by Professor Olaf Olsson, the first County Superintendent of Schools. 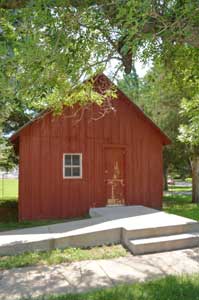 McPherson County’s first courthouse can be seen at the Old Mill Museum in Lindsborg, Kansas by Kathy Weiser-Alexander.

McPherson County was organized in March 1870 and named after James B. McPherson. Lindsborg won the county seat at an election held in May 1870 but remain so for only three years. The first school was taught in the courthouse by Mrs. Warner.

In May 1871, C. Carlson, agent for the First Swedish Agricultural Society, surveyed the townsite. In 1874, the first portion of the imposing Bethany Church was erected, which would be added on to in the next decade. The brown sandstone was quarried from the bluffs near the city and when completed, it measured 100X41 feet, with a spire 118 feet high. A large and elegant parsonage was also built and Professor Olsson was in charge of the church.

In June 1873, the county seat was moved to McPherson which was more centrally located in the county,  Early settlers experienced the trials of all pioneers, including Mother Nature’s wrath in the form of the grasshopper plague of 1874. Lindsborg was re-platted and officially recorded in 1876, making it the first city in the official records of McPherson County. 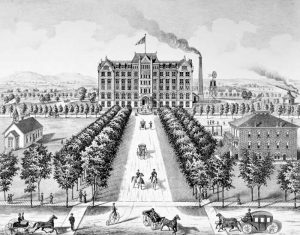 The year 1879 was a busy year for the community. The town was incorporated as a city with John A. Swensson elected as the first mayor. The Salina & McPherson branch of the Union Pacific Railroad came through and the first newspaper, called the Lindsborg Localist, was established. Wickham & Co.’s elevator was erected in the summer of 1879, at a cost of $6,000, with a capacity of 12,000 bushels. Anderson & Ferlin also built a larger grain elevator with a capacity of 30,000 bushels. In the summer of 1880, yet another grain elevator was erected, called the Farmer’s Shipping Elevator, at a cost of $3,000. It had a capacity of 6,000 bushels. 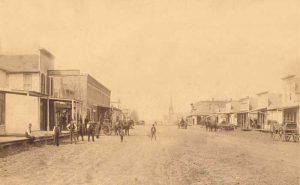 School District No. 3 built a fine two-story brick school, measuring 32X54 feet, in the fall of 1882 at a cost of about $6,000. At that time, it had an attendance of about 150 students and was divided into three educational departments — primary, intermediate and grammar, with plans to establish a high school.

The Kansas Posten, the only Swedish paper published in the State, was established in October 1882. 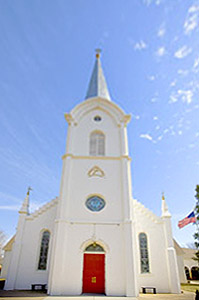 By 1883, Lindsborg’s population was about 600 with the town boasting water power and a steam flour mill, three elevators, a bank, two hotels, three newspapers, and a number of the largest general stores in the county. It also had one of the best district schools in the area. The town also had four churches including the Swedish Lutheran, the Swedish Methodist, the Swedish Mission, and the Methodist Episcopal. The Swedish Lutheran church, with a membership of 800 was the largest organization of the kind in the State. The Missouri Pacific Railroad was constructed through Lindsborg in 1887.

Lindsborg continued to grow in the next decades and by 1910, Lindsborg was the second largest town in McPherson County. At that time, it was called home to 1939 people and boasted a sewer system, waterworks, electric light plant, three banks, two flour mills, three elevators, a brickworks, a broom factory, three newspapers, and a number of well-stocked stores. It was also the headquarters of the Swedish American Insurance Company and Bethany College had become one of the leading educational institutions of the state. It was also supplied with telegraph and telephone connections, express offices, and an international money order post office with three rural routes. It was described at that time: 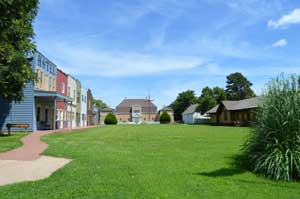 Swedish Pavillion and other historic buildings at the Old Mill Museum in Lindsborg, Kansas by Kathy Weiser-Alexander.

“They are artistic people, especially in music, and the little city is known to musicians all over the United States for the yearly rendering of the Messiah, an event which brings visitors from all parts of the country. Lindsborg is well built with fine business blocks and up-to-date stores.”

During the Louisiana Purchase Exposition, also called the St. Louis World’s Fair, in Missouri, that lasted from April to December 1904, a Swedish Pavillion, designed in the pattern of a turn-of-the-century Swedish manor house was built and displayed for visitors. After the fair, the building was scheduled to be burned, but William W. Thomas, a former U. S. minister to Sweden and Norway, purchased the building early in 1905 and presented it as it stood to Bethany College in Lindsborg. Thomas was a previous benefactor of the college and believed the building should belong to the school because the founder of the college, Dr. Carl A. Swensson, was instrumental in persuading the Swedish government to have an exhibit at St. Louis. Also, Bethany College was the only college founded by Swedish immigrants within the bounds of the Louisiana Purchase. After the building was moved to Bethany College in Lindsborg, it was used for classroom, library, museum, and department facilities for the art department. In 1969, the Swedish Pavilion was moved to the McPherson County Old Mill Museum. 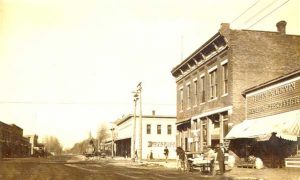 The community continued to prosper through the agricultural boom years in the first two decades of the twentieth century. By 1909, Lindsborg’s population had reached 2,000 and the value of the local property more than doubled in a 20-year period.

Declining crop prices stifled growth in the 1920s but the town persevered and passed the 3,000 mark in population in the 1930s. Growth stabilized in the following decades.

Today, Lindsborg maintains a population of approximately 3,300. Bethany College continues to be an anchor in the community and an attraction for visitors including their annual production of The Messiah at Easter. A 1914 article in the Topeka Daily Capital labeled Lindsborg “a cultural center” and the community maintains that designation today with a concentration of local artists and an ongoing effort to preserve and promote the town’s Swedish heritage and cultural ties. Today, about 30% percent of the population is of Swedish heritage. The downtown features gift shops that specialize in Swedish souvenirs, including various sizes of Dala horses. Lindsborg is known as “Little Sweden” and has hosted a biennial celebration called Svensk Hyllningsfest since 1941. It is held in October of odd-numbered years. 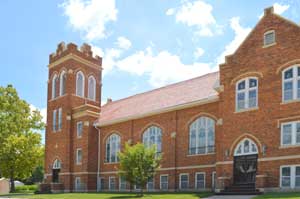 A number of downtown buildings and several homes in Lindsborg are listed on the National Register of Historic Places. Many of these buildings date to the 1880s and 1890s, a period of expansive growth.

The Mill Street Museum, located in a historical and recreational park at the south edge of Lindsborg features a number of historic buildings including the 1904 Swedish Pavilion, an 1898 Historic Flour Mill, two historic schools, a workshop, blacksmith shop, a depot, a homestead cabin, and the first county courthouse. The museum is located at 120 Mill Street. 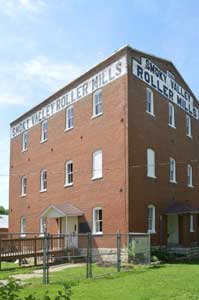