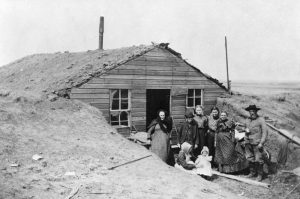 Lasker, Kansas is an extinct town in Ford County.

In the 1870s a Jewish group formed in Russia came to America to get away from the unrest occurring there at the time. Around 1884, some 17 immigrants originally planned to settle at the Montefiore Colony in Pratt County. However, when they arrived, no land was available, so they continued westward landing in Ford County. Settling about 6-10 miles from Ford, Kansas, they planned a utopian farming community. A post office opened on January 6, 1886, and by the spring of 1887, there were some 200 people living on about nine square miles. However, the post office closed on October 27, 1887

Why Lasker died is also unknown, but in the years 1888-1891 they faced extremely difficult weather and many claims were sold. By 1891, the settlement was gone. The exact location of this small community is unknown.