Leona, Kansas, located on the Wolf River in Wolf River Township, started in 1873. It is officially an extinct town today.

The town was founded by a stock company of which J. W. Shock was president. The land belonged to D. Kercher, and when a post office was established on May 13, 1873, he kept it in his house. The town was named for Leona Shock, the first baby born there. The town was laid out in June 1873.

To secure railway facilities, the company gave land for a depot, side-track, and about $1,000 in cash to the St. Joseph & Denver City Railway. This soon became the St. Joseph & Grand Island Railroad. 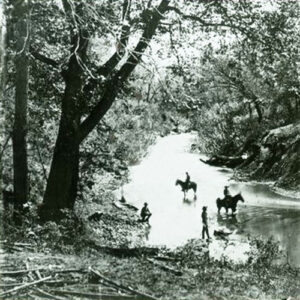 When H. Gregg opened a store, the post office was moved to that location. A second store was erected by Redd & Wilson. The first physician was Dr. S. H. Blakely, C. B. Channel opened the first drug store, and P. A. Floodin established the first hardware store and the first blacksmith shop. F. Case kept the first harness shop, and Kopietz & Marak operated the first meat market. In 1875 J. W. Shock opened the first lumber yard.

The first school was taught in 1867. However, when the fall term of the next year was to begin, the entire building had been stolen. It was later traced to a point near Padonia in Brown County but was never recovered.

The first hotel in the town was built by A. Negus, who conducted it until the spring of 1880 when it was rented to A. Gougler. On his retirement, after six months, it passed into the hands of J. Allison and then to V. A. Adams in 1882. At that time, it was still owned by Mr. Negus and was the only hotel in the town.

Jameson Brothers built the Jameson elevator just northeast of the railway depot in 1877 at the cost of about $4,000. It was 20 x 30 feet and three stories in height. A 12-horse power engine furnished power.

The Baptist Church was organized at this point in October 1880, but no house of worship was built. Instead, services were held in the school house.

A grain elevator was built just northeast of the railway depot in 1880 by J. E. Price. The three-story elevator had a capacity of 10,000 bushels of grain and could handle 2,000 bushels per day. A 15-horse power engine furnished power.

Snively & Hedges had a grain warehouse and purchased considerable amounts of corn and wheat. Their building measured 20 x 40 feet and was intended more for accumulating small shipments than for handling large quantities requiring storage for some time.

The Leona Public Library was opened in April 1882, obtaining 150 books. The schoolhouse is utilized as a library room.

In the early 1880s, the town also had three general stores, a hardware store, a drug store, a meat market, two blacksmiths, an agricultural implements house, a lumber yard, and a harness shop. At this time, E. Walters was the only resident physician.

On the night of May 1, 1882, a fire broke out in the hardware store of P. A. Flodin and, before its discovery, had made such headway as to render it practically beyond control. Despite the apparent hopelessness of the task, the citizens organized a bucket brigade and fought the fire. Thankfully, it began to rain, and the flames were subdued after more than two hours. The buildings destroyed were the Flodin hardware store, two store buildings on the north, owned by A. Angstad, and occupied on the first floor by Waiter & Reeber as a drug store, and in the upper story as a dwelling by J. Allison; the agricultural implement house of P. Flodin adjoining his store, and the wagon shop of J. W. Schock. The severest loss was that of Mr. Flodin, whose property was valued at $3,500, upon which only $2,900 insurance was carried. On the opposite side of the street, the stocks of Hoverson & Co. and Dillon & Springer Brothers were hurriedly removed, causing losses to each of about $50.

In 1910, Leona had banking facilities, express and telegraph offices, a money order post office with one rural route, and a population of 275.

However, Leona did not grow in the next decades, and its post office closed on February 1, 1986. As of the 2020 census, the population of the town was 41. This tiny town still has a scattering of homes, buildings, and an active Methodist Church.

It is located 15 miles west of Troy, Kansas.