The Marmaton River, a tributary of the Little Osage River, is a 102-mile-long waterway is situated in southeastern Kansas and western Missouri. 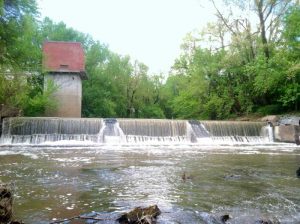 The river rises in Kansas northeast of Moran in eastern Allen County and flows generally eastward through Bourbon County, Kansas into Vernon County, Missouri where it joins the Little Osage River from the south, seven miles southeast of Rich Hill. The river got its name from French trappers who saw numerous prairie dogs along the river which they called Marmots. The river was named for the animals which eventually evolved into “Marmaton.”

During the Civil War, the Battle of Marmaton River occurred on the river in Vernon County, Missouri on October 25, 1864. Occurring on the same day of the devastating Battle of Mine Creek, in Kansas, Confederate Major General Sterling Price was again overtaken by Union cavalry under command of Brigadier General John McNeil. After sizing up Price’s forces, McNeil elected to refrain from a pitched battle at Marmaton River, instead favoring a skirmish. Casualties were light, but Price continued his epic retreat to the south. Three days later, on October 28, Price was again defeated at the Second Battle of Newtonia.