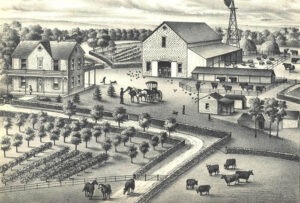 May Day, Kansas, was a hamlet near the west branch of Fancy Creek in northern Riley County. The town is extinct today.

Two German men by the names of Frank Droll and Ralph Niehenke were the first to settle in this area of the Blue River Valley in 1857. Near the crossroads of two wagon trails, this area had very rich topsoil that soon drew more men, including Peter Dick, A. S. Edgerton, O. E. Osborne, George Pickett, and Fred Schartz.

The first residents primarily lived in dugouts and worked as farmers. Water for the town was drawn from May Day Springs, just down the hill from the townsite.

A school was built in the community in 1867, and today is the only original structure left standing from the original town. It is located about one mile east of the townsite on Fancy Creek Road.

In 1871, Solomon Weichselbaum established a general store on May Day. A post office opened on April 13, 1871. The name of the post office was originally secured on a May Day, hence the name 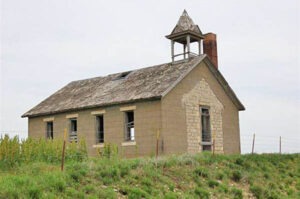 Two churches were built in the area, including the United Brethren Church and cemetery located one mile west of the crossroads and the Wesley Methodist Chapel northwest of the community. Neither exists today.

When automobiles began to replace horses and buggies in the 20th century, May Day really began to wane. Mrs. J.M. Byarlay started a store in her home in 1909 that sold a wide variety of items, including gas. However, May Day never grew very large, and its population in 1910 was 59.

It remained a crossroads trading center in the following decades, but its population continued to fall. On February 15, 1954, its post office closed.

The last business building left in May Day was the old Byarlay store which closed in 1969. It was later torn down, and a road was built over it.

Nothing remains in the original townsite, but an old cemetery continues to stand about one-half mile west. The 1867 school is about one mile to the east. 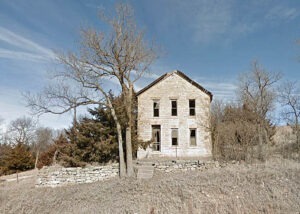 An old building west of May Day, courtesy Google Maps.

May Day was located about 35 miles northwest of Manhattan and about ten miles northeast of Green in Clay County. The townsite was at the crossroad of Highway 376 and May Day Road.