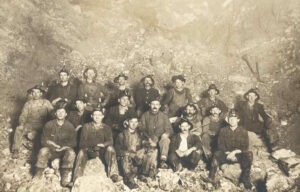 Minersville was a small town located near the northern border of Cloud County, Kansas. The town is extinct today.

Coal deposits were discovered here in 1869, which supplied thankful settlers because wood was in short supply.

Though the brown coal called lignite did not burn as cleanly as black coal from other parts of the state, it was affordable and accessible through strip and shaft mines. It was buried at various depths under the sandstone. Those fortunate enough to own lands along the coal vein quickly established mines and hired local farmers to work in their off-season.

Alexander Henderson came to the area to take advantage of the mining opportunities in 1870. He had worked as a stonemason in Scotland before moving to New York City, with his wife Jessie and their four children. Henderson worked as a stonemason and cutter in New York before traveling to Minersville to homestead two 80-acre parcels of land in Cloud County. He made a dugout to live in before returning to his family in New York to continue making money in his trade. 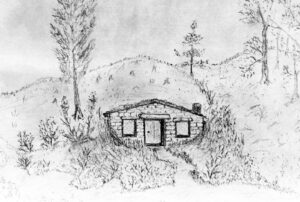 Soon afterward, Jessie Henderson and her children, along with a Mrs. Helen Chalmers, also of Scotland, came to Kansas to hold down the homestead while her husband continued to work in New York. They took the railroad to Waterville, Kansas, and then traveled by wagon to Minersville. In 1872, Alexander Henderson returned to Minersville permanently and went into the coal mining business. Henderson, like other miners in the area, farmed during the spring and summer months. After harvest, he opened his mineshaft and began production. The Henderson mine was located just south of the Republic County border.

Henderson then began to build a large stone house. When the basement was completed, the family moved from the dugout to the basement. The couple’s fifth child was born there in 1874. In the next years, he continued to work on the house which had walls that were more than two-feet thick. He then built a long stone barn south of the house, where people often held dances in the hayloft.

The Hendersons also donated land southeast of their house for the Minersville Store. The first store was in a tent but George Demarts later built a wooden structure. The store probably housed the post office which was established on May 24, 1877. A school district was established in 1878. 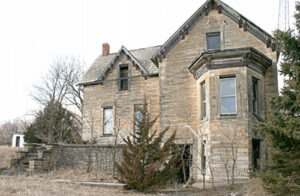 and his wife Jane came from New York and first lived in a dugout several yards east of the house when they first came to Minersville in about 1881. Like Henderson, they also farmed and mined were among the Minersville elite.

Another beautiful stone house was built for Charles Murray in 1882 by two Frenchmen from Jamestown – James and John Pourie. Built to look like a French castle or chateau, it sat on the side hill overlooking “Montgomery Hollow” to the northeast where many miners lived in dugouts. When the Murrays died, it was left to their daughter Ann Murray Whan, who was born in the family’s Minersville dugout.

The couple modernized the home in the 1940s. The home stayed within the family in the next decades until it was sold to Eldon and Tana Trost mid-1970s. The Trosts made many repairs and updates but by 1998 water had gotten underneath the patio area and some of the walls began to crumble. It still stands but has been empty since that time. It is located along old U.S. 81 along the southeast edge of Minersville.

By 1882, Henderson was operating three mine shafts on his farm, producing 12 tons of coal daily. That year, after the national labor union took notice of Minersville and encouraged miners to join for improved working conditions and safety, the Knights of Labor lodge was built. The building also served as a community center for area meetings, musicals, and theatrical productions.

Henderson often had problems with annual mine inspections. In 1892 one 60-foot shaft was determined “not in a condition for any man,” for it lacked ventilation, railing, and a second opening. Additionally, it was found that the hoisting cable was an “old hemp rope, almost broken in many places” and there were no gates at the top of the shaft. The rope was fixed and a gate was installed during the inspector’s visit.

Mine dump in Minersville, Kansas.

Coal production peaked around Minersville in 1894 and 1895, when more than 13,000 tons of coal was produced between Cloud and Republic Counties. At one point, there were 28 mines operating, employing as many as 500 men.

Minersville lured families from across the region to purchase coal, which they hauled away in wagons. While they were in town they shopped for groceries and provisions at the local stores. Minersville flourished with churches, hotels, saloons, and restaurants. For mining work, there were quarries, dugouts, and a kiln. 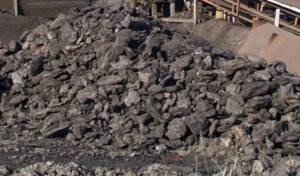 As the railroads began service to towns in the area, farmers had more fuel options available to them. They preferred the cleaner black coal, which cost more but left less residue than the brown coal. They burned the higher grade in their homes and the lower grade for farm and industrial purposes. With less emphasis on mining, the town began to dwindle and the post office closed on May 31, 1899.

In January 1903, the coal miners went on strike. The miners wanted a 40-cent raise to continue working. At that time, they received $1.60 per ton of coal mined and wanted an increase to $2.00 per ton of coal mined. The mine operators refused the increase stating that they could not meet this request and still make a profit. After a week of the miners’ strike, the operators offered a raise of 25-cents and made a public announcement outlining why they could not provide the full raise. However, the miners refused and never went back to work.

While these mines continued operation into the first half of the 20th century, the town of Minersville continued to decline.

In 1937, coal mining appeared to be doing fairly well in Minersville. Unfortunately, this prosperous coal-mining town was not able to compete with other fuel options that became available. The mine operators also struggled to compete with company-owned mines that were able to afford better equipment such as those in southeast Kansas. 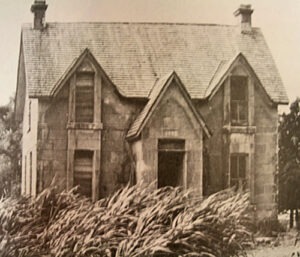 After Alexander and Janet Henderson passed away, Jessie Henderson died in the stone house in 1894 and her husband died there in 1897. Afterward, the west half of their land was given to their son, Pete while most of the east half was given to their daughter, Margaret. The stone barn was on the line between the properties, and because neither owner used or cared for the barn, it fell down. The home was last occupied in 1941 and it is now a pile of stones.

Today there are few reminders of Minersville.