Moneka, Kansas, once located about one mile north and one-half mile west of Mound City, in Linn County, is an extinct town today. 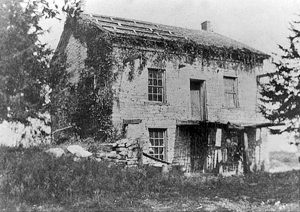 Moneka got its start in February 1857, when the Moneka Town Company was formed. The members of the town company were made up of Free-State men, including John B. Wood, Erastus Heath, Andrew Stark, Dr. Gilpatrick, Julius Keeler, Augustus Wattles, and his brother, John O. Wattles. The town was said to have been named for an Indian maiden, meaning “Morning Star.”

The first store was kept by O. E. & O. S. Morse; the first tin shop by F. C. Bacon, the first sawmill in Linn County was built by William Hobson on Little Sugar Creek, and a large hotel by George E. Dennison. Hobson would soon attach a corn-cracker to his sawmill.

The hotel would shelter, at various times, several of the Kansas Territorial Governors and most of the Free-State leaders of the territory, and here, plans of actions would be made on behalf of Free-State settlers.

Some of the first settlers included Augustus Wattles and his brother, John O. Wattles, who built their homes on quarter sections to the north, with Andrew Stark, who resided to the West. Stark would later serve as the first Clerk of the Kansas Supreme Court, from 1861 to 1867.

The first public school in Linn County opened at Moneka on August 1, 1857. Later that year, a post office was established on December 18.

John O. Wattles, an ardent abolitionist, Christian, and enthusiastic educator, influenced the Moneka Town Company to erect a large frame building for an academy. Work began on the building on July 4, 1857; but, it wouldn’t be completed until the following year. A post office was opened on December 18, 1857.

In 1858, Moneka contained a population of nearly 200 people. That year, the Moneka Woman’s Rights Association was organized. Comprised of both male and female members, the group fought to include political and civil rights for women in the territory’s constitution.

“It shall be the object of the Society to secure to woman her natural rights and to advance her educational interests.”

Unfortunately, at about the same time, the town began to decline rapidly and by the fall of 1859, many of the residents had moved to other localities. The businessmen moved mainly to Mound City. The post office closed on January 22, 1866. At some point, the academy building was moved to Linnville, where it remained until 1871 when it was removed to Pleasanton.