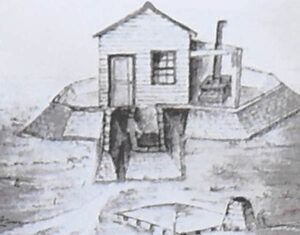 Monument was first established in Gove County in 1865, as an “eating” station of Butterfield’s Overland Despatch. Located on the Smoky Hill Trail, it was called Monument Station and also served travelers moving westward through Fort Wallace. Later it became an “unofficial” military post called Fort Monument or Post Monument. Though soldiers often camped here, it was never officially designated as a fort by the U.S. Government. On June 24, 1868, the soldiers and the post office were moved 35 miles northwest to Logan County, to a place that had previously been called Antelope Station. Here the post office continued to operate until September 1868 as Monument.

When the Kansas Pacific Railroad, a division of the Union Pacific Railroad, came through the area in 1870, the grade at Monument Station was too steep for a siding, so the siding was placed approximately two and a half miles east and called Monument Siding. At that time John B. Ennis platted a town called Ennis City at the site of the railroad siding. 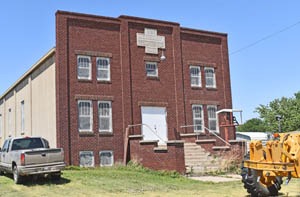 In 1910, the tracks coming through the village were operated by the Union Pacific Railroad. At that time, the town boasted a bank, a grain elevator, a hotel, a number of stores, an express office, a money order post office with two rural routes, and a population of 150.

In the next decades, the town maintained a relatively stable population. Monument’s post office closed on January 25, 1997. However, just three years later, it still had a population of 144. 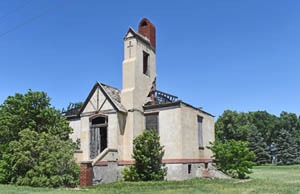 An old church in Monument, Kansas by Kathy Alexander.

The next decade would not be so kind. In 2020, the population of the community and nearby areas was just 56.

Though Monument is officially an extinct town today, the railroad still runs through and the grain elevators still operate serving area farmers. Throughout the community are numerous old buildings and homes in various states of disrepair.

Monument is located about nine miles west of Oakley on U.S. Route 40. 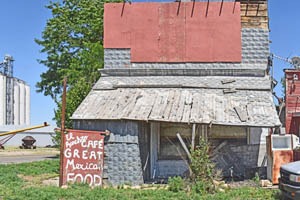 An old cafe in Monument, Kansas by Kathy Alexander.