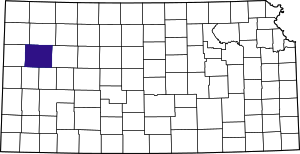 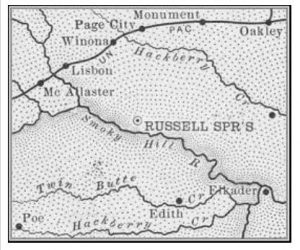 Logan County, Kansas, in the northeast portion of the state, was first called St. John County when it was created from part of Wallace County in 1881.

It was named for Governor John P. St. John, who served from 1879 to 1883. However, it was renamed Logan County in 1887 in honor of the late Union General John A. Logan. This came about after Governor St. John lost favor with the Republican Party after he left it to become the leader of the Prohibitionists.

The county’s landscape included level plains with a very small portion that is rough and bluffy. The north fork of the Smoky Hill River entered in the northwest and flowed southeast for some distance before uniting with the south fork, flowing southeast into Gove County. Twin Butte, Turkey, and Hackberry Creeks were important tributaries.

When Kansas became a state in 1861, western Kansas counties remained unorganized for many years. The region continued to be utilized by Plains Indians, was a vast buffalo hunting ground and potential highway to the sparsely settled West. However, the necessity of connections with Denver, Colorado, and the Pacific coast created a demand for a short, convenient, and fast route to the west.

In 1865, Eaton Station was founded as a stop on the Butterfield Overland Despatch. In 1867, it became known as the town of Russell Springs, named for William Russell, a rancher who utilized the springs to water his cattle. 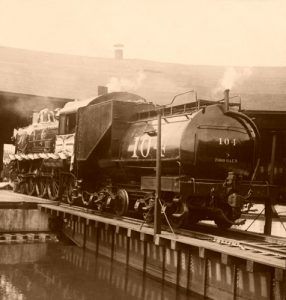 In the meantime, the Union Pacific Railroad was advancing further across the plains, creating the need to create two new counties, and in 1868, Gove and Wallace Counties were created. The importance of the Smoky Hill Trail came to a close as the railroad continued across the frontier.

When Logan County was formed in 1881, Russell Springs was selected as the temporary county seat. Governor John Martin then appointed J. W. Kerns, N.C. Phinney and R. F. McKnight to act as County Commissioners; Joseph W. Jones as County Clerk and N.G. Ferryman to act as Sheriff. The county was officially organized in September 1887.

In the meantime, several towns were established in the county, including Oakley, Winona, Monument, McAllaster, Page, and others. Some of these were “real” settlements, while others were little more than “towns on paper,” created by speculators in hopes of vying for the county seat and making money.

One of these was Logansport, which was laid out in 1887 by the Union Pacific Town Site Company, but never had any residents. Another was St. John Center, which was laid out in December 1855 but had already dropped from existence before the 1887 county seat election. Ennis City had dreams of becoming the largest city in western Kansas, but a town was never formed. 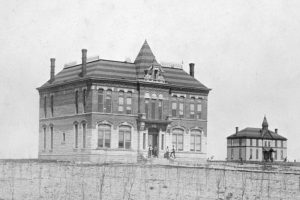 Some towns made promises that would occur if they were elected. St. John Center promised to build and convey to the public a School House Block, Fairmont Park, streets, and a Court House Block if the county seat was established there. Winona was expanded in size by the Western Town Site Company in 1886. Oakley was incorporated as a city of the third class and widely advertised its rich and bountiful soil, the branch line of the Union Pacific Railroad, and the fact that it was the most populous town in the county. Oakley also offered to give $10,000 to the county for the construction of a courthouse in the event they won the election. The Pioneer Town Company also expanded the site of Russell Springs by adding two new additions, promised to deed land to the county, and even began to build a two-story brick and stone building to serve as a courthouse.

The first election for the permanent location of the county seat was set for December 22, 1887. When the 1022 votes were counted, Russell Springs received 520, Oakley 217, Logansport 169, and Winona 116. On January 3, 1888, Russell Springs was officially made the permanent county seat of Logan County, and the County Commissioners legally accepted the transfer of Block 32 in Russell Springs from the Pioneer Town Company, which included the rights, title, and interest to the new courthouse. The interior of the new courthouse was not completely finished at the time of the transfer of title. The County Commissioners soon accepted bids to complete the courthouse and build a frame jail building. In January 1889, the jail building was completed, and soon Russell Springs was incorporated. 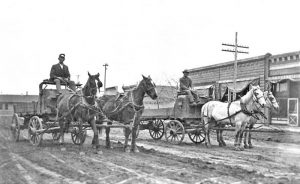 Considerable excitement was occasioned in the summer of 1888 by the discovery of a vein of nickel a few miles southwest of Russell Springs. Inside of a few weeks, more than 60  mining claims had been taken in the rocky portions of the county. This began the quarrying industry of lime and sandstone, which contributed to the county’s economy.

By 1910, the county’s population peaked at 4,240. At that time were post offices at Russell Springs, Edith, Elkader, Gill, McAllaster, Monument, Oakley, Page, Poe, and Winona. There were also 40 organized school districts, and a daily stagecoach still ran from Russell Springs to Winona. About half of the county was under cultivation, primarily growing corn, sorghum, and wheat. Livestock was also a significant contributor to the economy.

In 1911 and 1937, the City of Oakley tried to get the county seat moved from Russell Springs to Oakley. In support, they stated that Russell Springs had never recorded a population of over 200 residents, while Oakley was much larger. A county seat change required legal changes from the Kansas Legislature, petitions, population statistics, etc. Nothing came of the 1911 attempt, but in 1937 it appeared like the move might occur as Oakley was the only city in the county that had shown significant gains in population. 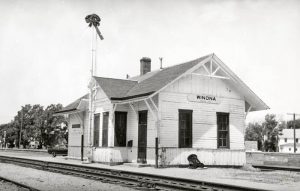 In the end, it was determined that the decision must come to a vote, and an election was held on November 8, 1937. The vote was 1,088 for relocation and 1,084 against relocation of the county seat. But, Kansas statutes required 55% of the voters to relocate the county seat, and Oakley lost its bid.

That changed in 1960 when Oakley possessed over 50% of Logan County’s population. At that time, Russell Springs, failing to grow in population, contained only two percent of the county’s population, making it one of the smallest county seat towns in Kansas. Once again, the county seat site was presented to a vote, but the count differed by only three votes. The outcome ended up with the Kansas Supreme Court. In 1963, it was settled, and the court ordered the county seat moved to Oakley. In July 1963, the county officials moved out of the old courthouse. A new courthouse was completed on West Second Street in Oakley in 1965. Today the two-story Renaissance-style brick and stone old courthouse building in Russell Springs serves as the Butterfield Trail Museum. 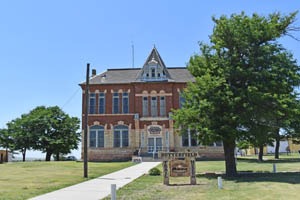 One of the county’s most distinctive features is a mile-long stretch of Smoky Hill Chalk bluffs that tower 100 feet high over the Smoky Hill River. These bluffs are called “Little Jerusalem” for their resemblance to an ancient walled city. In 2016, the Nature Conservancy purchased the property, and the Little Jerusalem Badlands State Park opened in October 2019.

Today, Oakley, Kansas, remains the county seat and is the largest town in the county. Its population is about 2840.