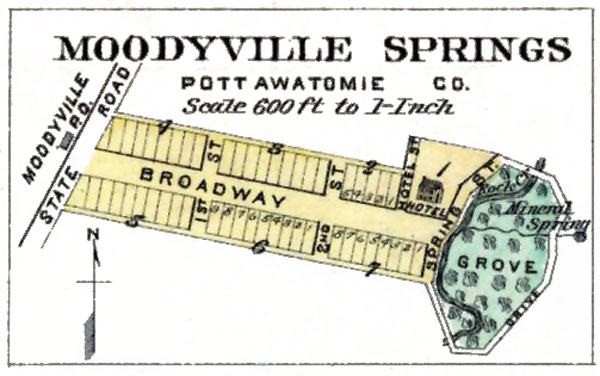 Moodyville, Kansas, a lost town in Pottawatomie County, was just next to Moodyville Springs, one of the best mineral springs in the state.

A post office was established on March 20, 1879, and a church building was erected by the Church of the Disciples the same year.

The town was laid out in April 1882.  A three-story hotel measuring 30×50 feet, with 21 sleeping rooms, was erected within no time. The frame building was built at the cost of $3,500. The village also had a stone schoolhouse, costing $500.

The springs were located east of the state highway, down Broadway Street in Moodyville, a short distance from where a suspension bridge crossed Rock Creek.

These springs, owned by E.M. Moody, flowed from the base of a limestone bluff on the east bank of Rock Creek. Surrounded by a fine grove of natural timber, the thick foliage rendered the surroundings very pleasant and kept out the sun’s burning rays in midsummer. There was a large, level park below the springs, on which was located a nice fountain.

Other improvements were made, including an avenue bordered by large trees that connected the springs with the main road, a fish pond, side walks, and swinging bridges.

The water of the main spring had a temperature of 54 degrees and a flow of 360 gallons per hour. The spring waters were very strong in magnesia salts with traces of nitrate, sulphate of lime, sulphate of soda, sulphate of potassa, carbonates of lime, chloride of sodium; and contained alumina and organic matter. 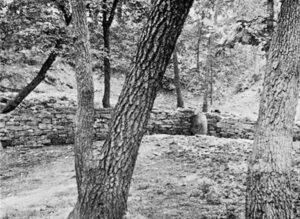 Southeast from the springs on the bluff is a mound, suggesting pre-historic periods, giving reasonable evidence of the existence of the mound-builders. Here was a lookout that commanded an extensive prospect over the surrounding country.

In the 1880s, it was described as a place of considerable prospective importance. However, it was obviously not successful. By the early 20th century, no attempt had been made to keep the property in repair.

In 1910, Moodyville was a country post office located on the Kansas Southern & Gulf Railroad with a population of only 33.

Moodyville and the springs were located about four miles northeast of Westmoreland.