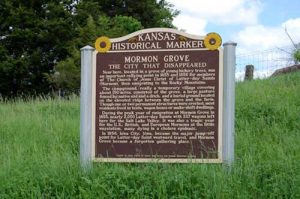 When thousands of Mormons were moving westward to the great Salt Lake Valley between 1848 and the completion of the transcontinental railroad in 1869, they developed several points of departure along the Missouri River.

Mormon Grove was but one of the many outfitting stations utilized by the Mormons. Located about four miles west of Atchison, Kansas in a grove of young hickory trees, the grove became an important rallying point in 1855-56. The first large group of Mormons debarked the riverboats in Atchison in April 1855 and moved westward to Mormon Grove.

There, they immediately began to fence 160 acres and planted crops. The site, at the head of Deer Creek, also served as an excellent camping place with water, wood, and range for the stock. Like the other Mormon camps along the Missouri River, it was close enough to the port city so the Mormons could easily purchase supplies. The temporary village also had a small cemetery and a couple of permanent structures, but most residents lived in tents, covered wagons, or make-shift dwellings. 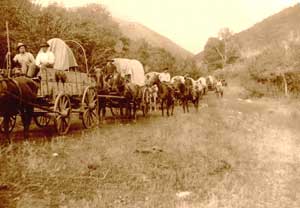 In 1855 eight companies, totaling 2,041 people and 337 wagons, left Mormon Grove for the Salt Lake Valley. Their route across Kansas appears to have been northwest on the “New Ft. Laramie Road” to the vicinity of Kennekuk and then continuing on the “Old Ft. Laramie Road” as established by Major Wharton in 1844 to the head of Walnut Creek in present-day Brown County. Unfortunately, for those many pioneers, they were also hit with a cholera epidemic that year, which killed hundreds of them along the way. About 15 people were left at Mormon Grove to await the next year’s immigrants.

During the 1856 season, however, only one company of 97 Mormons left from Mormon Grove. Most immigrants were then going directly by rail from the east coast to Florence, Nebraska. By that time Iowa City, Iowa became the major jumping-off point for Mormon westward travel and Mormon Grove became a forgotten gathering place.

To get there, travel west on Highway 73 from Atchison approximately 4.5 miles and turn south on a section road. The first farmhouse on the west side of the road marks the farm of Mr. Floyd Armstrong, where the old cemetery — all that is left of Mormon Grove today — is located. At least 16 Mormons were buried there, but no traces of the graves remain. 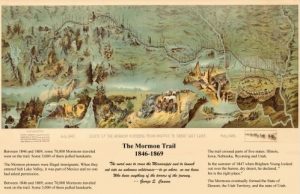