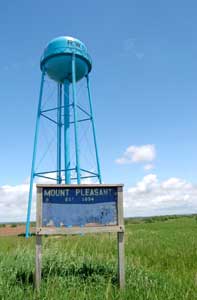 The site of Mount Pleasant, Kansas by Kathy Alexander.

The first settler in the area was a man named Thomas L. Fortune in 1854, who opened a general store. Other early settlers of the Mount Pleasant Township included Michael Wilkins and James Laird. They settled in August 1854, followed by Jacob Grindstaff, Martin Jones, Levi Bowles, Andrew J. Peebler, Christopher Horn, P. R. King, W. C. Findley, A. S. Speck, and Amos Hamon. In March 1855, a post office was established in Fortune’s store, and the owner became the first postmaster.

In 1857 a town company was formed, and John P. Wheeler surveyed the site. In 1858 the first school opened in the fall, and two years later, the Presbyterians built the first church In 1860. In May 1862, the Church of Christ was organized, meeting in the schoolhouse. In its early years, Mount Pleasant became a commercial center for the area, owing mainly to the overland freighting outfits that passed through there on their way to Denver and the Pacific coast.

However, the town didn’t grow as much as its supporters had hoped, as, in August 1862, the post office was moved to Locust Grove. It was re-established in Mount Pleasant in May 1864 but was moved again to Potter in February 1888. However, the townspeople did without a post office for only two months, as another one was established for a third and final time in June of the same year. 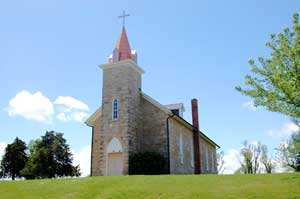 The post office closed for the last time in February 1900. Today, there is nothing left of the town, and it would be difficult to find the site, but for an old sign, that marks the spot in the middle of a rolling field. The town was located north of present-day Potter, Kansas.

Although not in the town of Mount Pleasant, a Catholic Church was organized northeast of Mount Pleasant in 1857 by several Catholic settlers. It was one of the first parishes established by the Benedictine Fathers at Atchison. At first, services were held in the humble log cabins of the Catholic settlers until a small church was built native timber. Father Augustine Wirth attended to the spiritual demands of the early Catholic settlers. However, the first wooden building was later destroyed by strong winds. In 1866, they built a new, more substantial edifice of stone that still stands today. The beautiful St. Patrick Catholic Church on the top of a hill that overlooked the gently rolling prairie still provides services to parishioners today. Next to the church is an old cemetery. 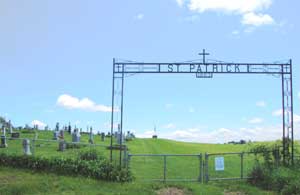 It is located in the southeastern part of Atchison County, about 10 miles south of Atchison on Highway 7 and one mile west on a county road. In the winter, when the trees are bare, the church steeple can be seen for miles.