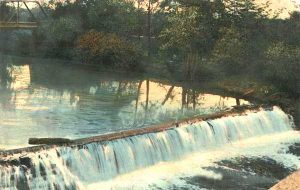 Pleasantly situated on a slight rise in the beautiful valley of Stranger Creek, Potter, Kansas got its start as a station on the Atchison, Topeka & Santa Fe Railroad. However, the area’s history dates back to the 1840s when Paschal Pensoneau, an old French trader who worked with the Kickapoo tribe, established himself on Stranger Creek in about 1839.

The building of Potter was the third and the most successful attempt to establish a town in the vicinity. The first attempt was at Mount Pleasant in 1854. It was one of the first towns started in Kansas, and established the first post office in Atchison County.  It prospered for a time and was a candidate for the county seat but, gradually declined, and after the establishment of Potter, it quickly became a memory. In the early days, even before Mount Pleasant was established, a town was laid out near the big Mercer Spring, just northeast of the present-day site of Potter, which was called Martinsburg. However, outside of a small store and a few cabins, the town never advanced further. 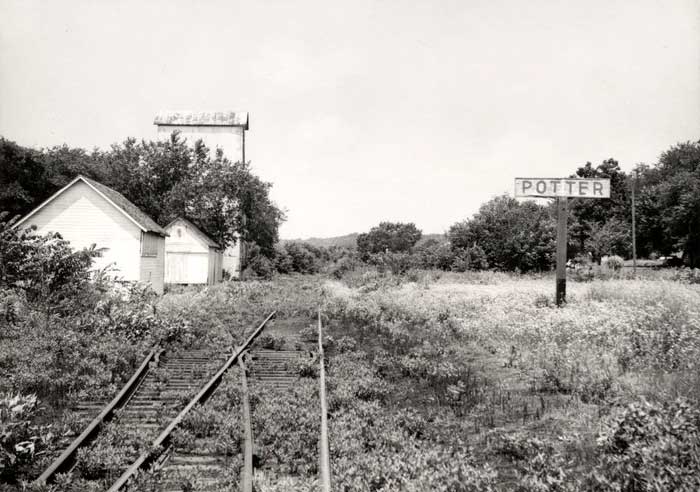 Early in 1886 the Leavenworth, Northern & Southern Railway, later a branch of the Santa Fe Railroad, and known as the “Pollywog,” was built and a station located where Potter now stands. A town was platted and initially called Bennett Springs, after James Gordon Bennett, the well-known eastern journalist. The mineral springs on the Masterson farm near the townsite were attracting considerable attention at the time, and it was thought that a popular resort could be built up there. The medicinal properties of the water were discovered by Dr. Rice, a local physician, and subsequently analyzed by experts, who confirmed Dr. Rice’s conclusions, and a number of people claimed to have used the waters in liver, kidney, and other complaints with good results.

Henry C. Squires, afterward a Potter banker, conceived the idea of establishing a health resort here and named it in honor of James Gordon Bennett, who, it was thought, would use his influence towards getting eastern capital interested in the project. The expected financial backing was not forthcoming; however, and the proposed development of the springs was never made. 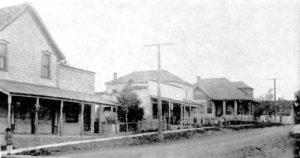 In the meantime, the railroad people had christened the town Potter, in honor of Joseph Potter, who owned the property owner on which the town was laid out. For a time, the tax rolls continued to carry the name Bennett Springs, but it was known to all as Potter. The first lots in the town were sold to James Stalons, who served for many years as a Justice of the Peace as well as a Minister. The first house on the townsite was built by Thomas J. Potter in 1882, four years before the town was laid out. The first business was a general store established by Charles Klein.

Potter gained a post office in February 1888 when it was removed from nearby Mount Pleasant. At that time, the town name “officially” became Potter. As the principal station on the Santa Fe Railroad, between Atchison and Leavenworth, the town prospered over the next several years. It gained its first newspaper — the Potter Press in 1898. In 1900, the Potter Leaf was established, which was changed to the Potter Weekly Kansan three years later.

By the turn of the century, it was the largest banking town in the southeastern part of the county and boasted several general stores, implement and hardware houses, a school, a church, and 250 people. The first school in Potter was built in 1911.

During the Great Depression, a new high school was built in Potter as part of President Franklin D. Roosevelt’s Works Progress Administration program. The school was completed in January 1941. The two-story structure graduated its last high school class in 1957 but remained in service as a grade school for a number of years, but that too eventually closed. Today, the old school serves as a private residence. 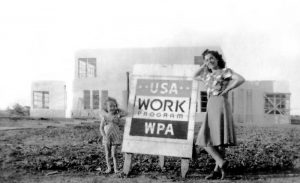 Potter school as it was being built in 1940. 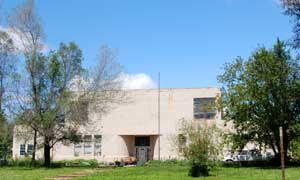 The old Potter High School is now utilized as a private residence, by Kathy Alexander. 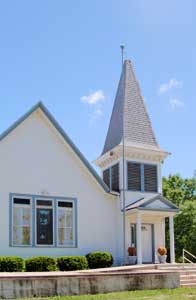 Like so many other flourishing agricultural and railroad towns that flourished a century ago, Potter declined over the years. Potter’s post office was closed in May 2009. The town is unincorporated today and is very small, but it still maintains one open business and a church that continues to serve parishioners.

Potter is located on K-74 9.5 miles south of Atchison.