Located in the Smoky Hills southwest of Salina, Kansas, Mushroom Rock State Park includes beautiful sandstone formations and is rich in early Kansas history and railroad lore. The Fremont Trail passed to the north, which the Kaw-Santa Fe Freight Company used, and became the first route for the overland stages to California until they were forced to a northern trail by hostile Indians.

Throughout the five-acre park, dozens of pedestal or mushroom-shaped rocks are the remains of beach sands and sediments of the Cretaceous Period, dating from 66 to 144 million years ago. At one time, Kansas was in the bed of an inland sea, and the action of the receding waters produced the beginnings of these stone shapes. Later, a very deep layer of Dakota Sandstone covered the entire area.

Though the effects of wind erosion can be seen throughout the Great Plains, it can be seen abundantly here. Made of Dakota Sandstone and sedimentary rock, the formations are held together by natural cement. The Dakota Sandstone resists erosion while underlying softer stone weathers away, forming a pedestal. Over millions of years, the violently swirling winds have gradually shaved away the soft sandstone, leaving small islands of resistant sandstone. The two largest formations are approximately 25 feet tall, with caps about 15 feet wide. Another forms what looks like a shoe. 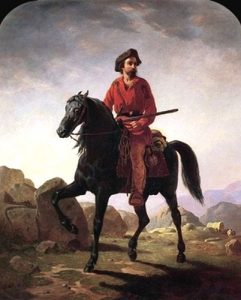 Accounts of the unique geologic formations began appearing in scientific and popular literature in the late 1860s. But, long before then, the unique geological oddities were a landmark for Native Americans. In July 1844, Captain John Charles Fremont, known as “The Pathfinder,” traveled eastward across the plains returning from his first California expedition. Frontier scout and guide Kit Carson once described it as his  “favorite little place.”

Later, when gold was found in Cherry Creek (now in Denver, Colorado) in 1859, thousands of people wanted to make their way to the Rocky Mountains to find their fortunes. At this time, there was no “official path” all the way across Kansas, and the westernmost post was in Salina. But, when the news of Colorado Gold reached Kansas City, pioneers were determined to find a faster way to get there and soon developed the Smoky Hill Trail. The path, which followed an ancient Indian trail along the Smoky Hill River, traveled near today’s state park, and early travelers would venture off the trail to visit the rocks. 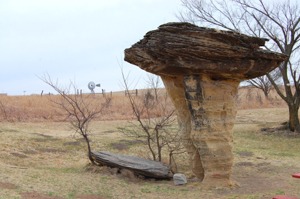 Until 1963, the only way to see these fascinating formations was by traveling a rough trail on privately-owned land. However, that year, Ellsworth County constructed a road that allowed access by automobile. Soon afterward, the Ellsworth County Historical Society secured five acres from two individual owners to be utilized and preserved as a park. The land was then deeded to the Kansas Department of Wildlife and Parks. On April 25, 1965, with over 300 people in attendance, Mushroom Rock State Park was officially presented to the state and dedicated as a state park.

A satellite park of Kanopolis State Park, it is designated as a day-use area only. There is no camping allowed. Admittance is free, and no permits are required. The park is located one mile south of Carneiro, Kansas, in Ellsworth County. It can be reached via a short drive south from K-140 at Carneiro on 25th Road or by driving west from K-141 via Avenue K, also a county road.