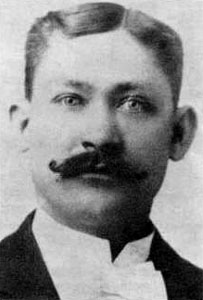 George Washington Earp was the mayor of Grant County and a constable of Ulysses, Kansas.

Simply called Ulysses, Kansas at the time, this town was established on March 20, 1873. Later, the town was moved three miles to the west due to encumbering debt in 1909. Afterward, it was referred to as “Old Ulysses” and nothing remains of the old townsite today.

The settlement was established at about the time that the Santa Fe Trail traffic was drastically slowing down due to the coming of the steam engine to western Kansas. Named for General Ulysses S. Grant, the settlement was surveyed by George Washington Earp, first cousin to Wyatt Earp of Dodge City and Tombstone fame, in 1885. Earp was Ulysses’ first promoter, businessman, and, like his cousins, its first peace officer. He was also Grant County’s first mayor.

The town gained a post office on April 29, 1886, and was “officially” organized in June of 1888. At that time, Ulysses boasted a population of some 2,000 residents and supported 12 restaurants, four hotels, six gambling dens, a bank, a large schoolhouse, a church, a newspaper office, and an opera house. Though Kansas was supposedly a dry state at the time, the town also had about 12 saloons.

The year 1888 was the same year that Ulysses became embroiled in a bitter contest with nearby Appomattox (then called Tilden) for the county seat. Though Ulysses finally won the honor of county seat, the town went deeply into debt winning the title.

In 1909, when Ulysses was unable to climb out of its profound financial burden and to prevent foreclosure of the entire townsite, the community just decided to move. Loading every building onto skids, the townspeople relocated three miles across the prairie to the present-day site of Ulysses, which was then called “New Ulysses.” All the lots in the old town were then deeded back to the East Coast bondholders and only a masonry school was left behind. The post office closed on July 15, 1909. 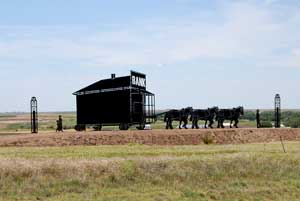 Today, there are no buildings left on the old townsite. However, a wonderful sign has now been erected that marks the site. 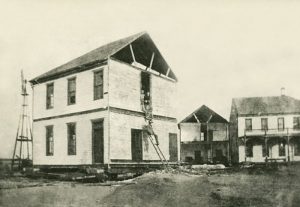 Moving the Edwards Hotel from Old Ulysses to New Ulysses, 1909. 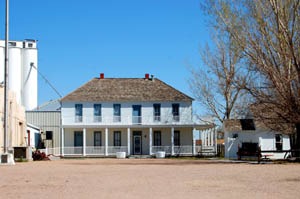 The old Hotel Edwards that was moved from Old Ulysses is now part of the Grant County Museum in New Ulysses by Kathy Weiser-Alexander. 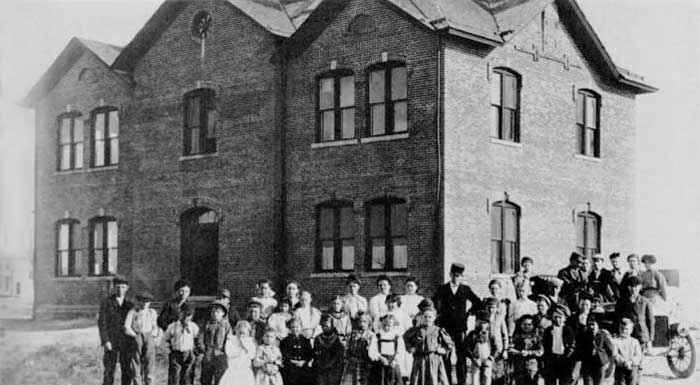 One building that was not moved to New Ulysses was the Old Ulysses brick schoolhouse. In 1920, it was torn down and some of the bricks were used to build the Kepley Brothers Garage on Main Street in New Ulysses.