The county seat of Jefferson County, Kansas, Oskaloosa is one of the oldest towns in the county, having been settled by Dr. James Noble in February 1855.

Situated on gently sloping hills extending back from the left bank of Big Slough Creek, more settlers came from Iowa that same year, finding the location ideal for a number of business purposes. Among these Iowa settlers were the founders of the town — Jesse Newell and Joseph Fitsimons.

Though it would be several years before the community gained a church, a Baptist minister began holding religious services in his in the spring of 1855. 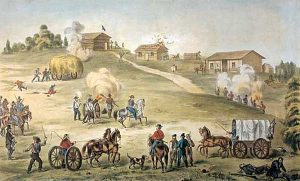 The following year, Newell bought Noble’s farm and Fitsimons bought land adjacent to Newell. The pair then laid out a town of 40 acres, which was very similar to their former home of Oskaloosa, Iowa, for which the new settlement was named. The first stone building was erected early in 1856, by Isaac Newhouse, but was purchased by Joseph Fitsimons, who opened the first store. In the meantime, Jesse Newell built a sawmill.

A post office opened on November 11, 1856, with Joseph Fitsimons serving as the first postmaster. Early on, the large lots were planted in forest and orchard trees, which over time provided perfect shade and an abundance of fruit for the community.

Though things were off to a good start in the tiny settlement, like others in eastern Kansas, it was involved in the violence of the Kansas-Missouri Border War. Two skirmishes took place near Oskaloosa in September 1856 including the Battle of Slough Creek on the 11th and the Battle of Hickory Point, two days later.

In the spring of 1857, the first school was built from native timber. The frame building was a simple rough board enclosure and the students were first taught by Miss Mary Finnicome. Later, the teacher became the wife of Joseph Fitsimons. Located in the eastern part of the town, the building would later become part of Thomas H. Noble’s store.

At about the same time, the founders of the town struggled to manage the business alone and formed a town company. Its members were: Jesse Newell, who was president; Joseph Fitsimons, Franklin Finch, Henry Owens, N. B. Hopewell, V. F. Newell, John Newell, Isaac Newhouse, William Meredith, and W. C. Stagg.

That first year, the town grew slowly, but by the end of the year, it had about a dozen buildings, including a large hotel built of native timber by Thomas H. Noble.

The public school district was formed in 1859 and a new schoolhouse was built the following year.

The summer of 1860 was that of a big drought and a great number of settlers left the area. But, many determinedly stayed, and a number of new enterprises were undertaken including a newspaper called the Independent, and a schoolhouse, church, and grist-mill were erected. By the close of the year, the population was more than 400.

The Oskaloosa Independent newspaper, one of the oldest in the state, was established on July 2, 1860, by John W. Roberts. A strong abolitionist, Roberts actually lived in Ohio but, wrote editorials from his home and his brother-in-law, J.W. Day, was the local editor and business manager. Two years later, Roberts moved to Kansas and the newspaper remained in the family for decades. It continues to be published today. 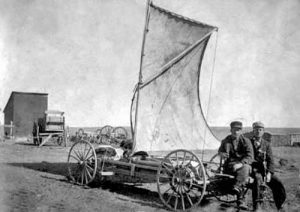 Owing to the failure of crops, the year 1860 was a dull one, and the citizens devised various schemes to while away the time. During this time, a rather singular invention was made by Samuel Peppard. It was a sailing wagon, weighing about 350 pounds and equipped with a sail 9 by 11 feet raised over the front axle. The steering apparatus was attached to the front and it moved along with the wind, sometimes at the rate of 15 miles an hour. A party consisting of Peppard, Steve Randall, J. T. Forbes, and Gid Coldon started to Pike’s Peak in the vehicle. They had about 400 pounds of provisions and ammunition. They made the trip to within about 100 miles of Denver in safety but then they were struck by a whirlwind, which completely demolished the vehicle, and injured its occupants. They had been on the road for about four weeks, but only traveled nine days. Sometimes they traveled at the rate of 15 miles per hour.

During the dull times, in the early history of Oskaloosa, several of the most prominent men organized themselves into a “Lazy Club.” The club had rigid rules, and if any member was seen to have any implementation of labor, his case was promptly investigated, and if he was proven guilty of having performed any work, he was expelled. The badge of distinction was a Barlow knife, which was awarded to the champion lazy man.

Though some of Oskaloosa’s citizens might have been “lazy,” others were not including the Methodist Espisopalians, who started building a church in 1860, which was completed the following year.

During the Civil War the town made little improvement, just barely holding its own in population and the amount of business conducted. After the war, the town revived a little, but for a great many years did not increase its population very much, though many public and private improvements were made, however.

The old buildings, built for temporary accommodations on first settlement, steadily gave way to neat and attractive residences and large and substantial business buildings. In 1865 Oskaloosa citizens voted bonds for the erection of a large two-story brick schoolhouse. Work on the building soon commenced.

The Jefferson County Courthouse was built on the town square in Oskaloosa in 1867.

In August 1869, the city was incorporated and city officers were appointed.

Several churches were also built after the war including the Episcopal Church, which was completed in 1870, and a Presbyterian Church in 1872. Two African American churches were built in 1872 – one for the Baptists and another for the Methodists.

This order of things was kept up until 1880 when the number of inhabitants was just shy of 800. The next year, however, the city began to revive a great deal, growing to a population of about 1,000. By this time, the town also boasted five churches, two schoolhouses, two banks, 21 stores, three hotels, two livery stables, a grain elevator, a sawmill, two printing offices, and several shops of various kinds. 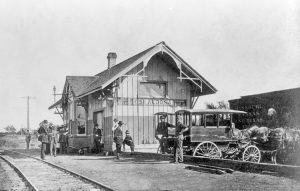 By the turn of the century, the town boasted two railroads – the Atchison, Topeka & Santa Fe, and the Missouri Pacific Railroad. It also supported a high school, churches of nearly every denomination, and all lines of business, including banks, newspapers, a saw and grist mill, an electric light plant, an ice and canning factory, and a bridle bit factory. Local farmers also produced grain and other products in large quantities. The population in 1910 was 851.

Over the years, Oskaloosa maintained its small-town atmosphere while continuing to thrive as the commercial center of Jefferson County, an agricultural community, and later, as a bedroom community to the nearby towns of Lawrence and Topeka.

Situated at the intersection of U.S. Highway 59 and Kansas Highway 92, it is surrounded by rolling wooded hills, which provide excellent hunting. Perry Lake, just a few miles west of town, offers camping, fishing, and boating on one of Kansas’ prettiest lakes.

Much of the history of Jefferson County can be seen at Old Jefferson Town in Oskaloosa. Here, the Jefferson County Historical Society has moved eight structures from around the county to a ten-acre park. These restored and furnished buildings include a blacksmith shop, jail, general store, church, schoolhouse, a Victorian home, and the John Steuart Curry boyhood home & museum. The site also includes an art gallery and a genealogical research center.

The Museum Building, which houses historic displays, as well as the Research Library was once two separate buildings that served as the Kilgour and Plum Grove Schools before being moved to Old Jefferson Town. The front of the building houses the library which contains an abundance of information including newspapers and numerous records for the census, cemeteries, military, marriage, church and town histories, and resource books. Old Jefferson Town is located on Highway 59.

Today, Oskaloosa is called home to about 1,050 people. 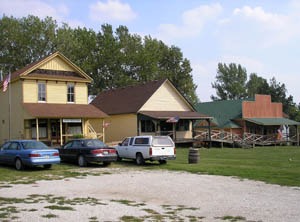