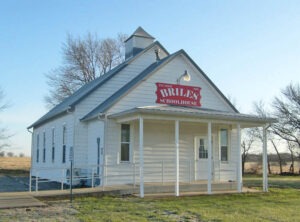 Peoria, Kansas, one of the oldest towns of Franklin County, was located in the eastern part of the county, six miles east of Ottawa. It is an extinct town today.

It was named for the Peoria Indians, who lived on a reserve in eastern Franklin County and western Miami County, along with the Wea and Piankashaw tribes. In April 1857, the land was opened to white settlers. Upon being offered, the land was nearly all immediately bought at prices ranging from $1.25 to $2.50 per acre. That year, Albert Johnson settled on a promontory projecting between Hickory Creek and Marais des Cygnes River Valleys. After Albert Johnson opened a store, other settlers followed. One of these was David Burton, a farmer/wagon maker and free-state advocate who came in 1857 and opened a mercantile business in 1858. Jacob Sumstine came to Peoria in 1857 and later operated a mercantile store, a two-story building with a meeting hall on the second floor. Afterward, he became the Franklin County superintendent of schools before Kansas was admitted to the Union and assisted in organizing the county’s school districts.

The first election in Peoria was held in the fall of 1857, at which there was cast but one Democratic vote. During this year, Mr. Fisher, instigated by interested parties, jumped the claim of Mr. Wright. As the quickest way of settling the difficulty, Wright shot Fisher, killing him instantly. The instigators then took the case before the Secretary of the Territory, who replied that it was the recently appointed Franklin County Sheriff’s duty to attend to it. However, Wright was the County Sheriff, and the affair was dropped.

The first Free-State meeting in the county was held at Peoria, at which time, P. P. Elder was nominated for Prosecuting Attorney, and Judge Curtis for Delegate to the Territorial Conventio,n whose duty was to nominate a Delegate to Congress.

In 1859 Peoria entered the county seat contest, along with Mt. Vernon and Ohio City, against Minneola, which was the current county seat. Though Peoria won, Minneola refused to recognize it and a lawsuit followed in which Minneola was successful. Later, however, the county seat would move to Ottawa.

A post office was established on July 27, 1860, with Albert Johnson as the first postmaster. His brother David Johnson joined him that year and ran a hotel in Peoria for 21 years.

Early churches included the old rock Methodist Church in use as early as 1869 and the First United Brethren Church, also of rock, built in 1872.

For years, Peoria petitioned the Missouri Pacific Railroad to build south across the river through Imes. However, the town was unsuccessful, and its growth slowed.

In 1910 Peoria had a money order post office, a few general stores, and a population of 125.

Peoria Rural High School opened in 1916 but graduated only four students in its life span.

One remaining landmark in the area is the Briles one-room school built in 1868. Serving students for nearly a century, it closed in 1961. The building now serves as a community center, meeting hall, and voting location for Peoria Township. It is located on Highway 68 at Texas Road.