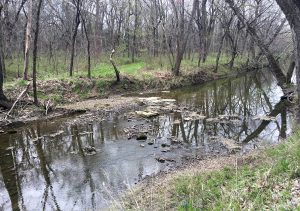 Mine Creek near Pleasanton, Kansas.

Potosi, Kansas, once located on Mine Creek, about two miles east of Pleasanton in Linn County, is an extinct town today.

The settlement got its start in 1856 when a town company, comprised of all pro-slavery men, laid out the townsite on 320 acres. First called Hillsborough, it gained a post office on September 17, 1857, with John W. Garrett as Postmaster. A store was built by J.E. Hill and Mr. Garrett, who along with O.H. Sykes also, built a sawmill.

At one time, the town had six houses and about 30 inhabitants. By 1859, the area was under the control of Free-State men, and the town’s name was changed to Potosi in November. It took its name from the mining activity that had once taken place there. Explorers in the early 19th century came across abandoned mining sites along a creek south of Marais des Cygnes River. The background of these early miners remains a mystery; but, it inspired early residents of the region to name this waterway “Mine Creek.” The town and township were named after Potosi, Mexico, a famous silver-producing region. The post office name was officially changed to Potosi on November 8, 1859.

Potosi struggled from the beginning with the Kansas-Missouri Border War in the 1850s and the Civil War of the 1860s. In addition to the political struggles, the region also experienced a major drought from 1859 to 1861. During this time, hundreds left the area.

After the Civil War, many began to start moving into the region again, but when Pleasanton was established, it spelled doom for tiny Potosi. Situated on the Kansas City, Fort Scott & Gulf Railroad, Pleasanton grew quickly and Potosi was abandoned. Its post office closed on August 10, 1869.