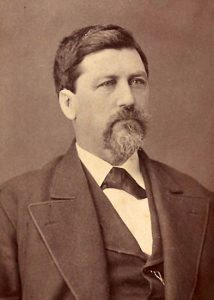 Samuel Newitt Wood was a Free-State advocate and politician in Kansas.

Wood was born at Mount Gilead, Ohio on December 30, 1825, the son of Quaker parents, from whom he gained his anti-slavery sentiments at an early age. He went to public schools and while still a young man, became greatly interested in politics. In 1844, although too young to vote, he was Chairman of the Liberal Party Central Committee of his county. Four years later he supported Martin Van Buren, the Free-soil candidate for president.

One of the lines of the Underground Railroad passed near his home in Ohio and  Wood was one of the conductors on the route. In 1859, on his return from a trip with some freed slaves, he made the acquaintance of his future wife, Margaret W. Lyon. He taught school and at the same time, read law and was admitted to the bar on June 4, 1854. Long before that time, he had determined to cast his lot with Kansas to assist in her admission to the Union, free from the taint of slavery, and two days after being admitted to practice, he was on his way to the territory.

Early in July, he settled on a claim four miles west of Lawrence. He immediately entered into the political and social life of the area and became an acknowledged local leader of the Free-State Party. He was one of the men who rescued Jacob Branson from  Sheriff Samuel Jones, an act that brought on the Wakarusa War. He was a delegate to the Pittsburgh, Pennsylvania Convention which organized the Republican Party in 1856, to the Philadelphia Convention the same year, and to the Leavenworth Constitutional Convention in 1858.

The following year he moved to Chase County, Kansas, represented Chase, Morris, and Madison Counties in the Territorial Legislatures of 1860 and 1861, was a member of the first State Senate in 1861 and again in 1867, a member of the House in 1864, 1866, 1876 and 1877, and speaker during most of the last session. In 1864, he was appointed Brigadier-General of the Kansas State Militia, and in 1867 Judge of the 9th Judicial District.

For two years he was in Texas, was one of the original stockholders of the Atchison, Topeka & Santa Fe Railroad, was part owner of the Kansas Tribune of Lawrence in the 1850s, established the first newspaper at Cottonwood Falls — the Kansas Press; and at Council Grove — the Council Grove Press. He was later connected with the Kansas Greenbacker of Emporia, the Topeka State Journal, the Woodsdale Democrat, and the Woodsdale Sentinel of Stevens County. He was always a reformer or a progressive in politics and was a member of the Republican, Greenback, Labor, and Populist parties.

He was killed on June 23, 1891, by Jim Brennen, as the result of a vicious county seat fight referred to as the Stevens County War in southwest Kansas.