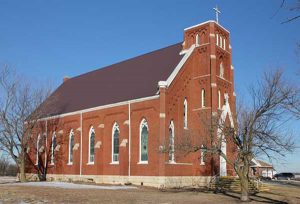 This area was first settled in 1857 by a group of Irish immigrants. The first Mass was offered in a home in 1859 by a priest from St. Benedict Abbey in Atchison, Kansas. The parish was established in 1862, becoming the first Catholic parish in Marshall County. By 1869, enough people lived in the area to justify a post office that opened on March 23. With a bright future, the area residents began making plans to build a new church with construction beginning in 1905. However, it was at about this same time, that the parish reached its peak with over 85 farm families. The post office closed in 1906, but work on the church continued. It was completed at a cost of $30,000 in 1908.

The red brick church measures 50 feet wide and 100 feet long. It has a unique interior featuring 8 long stained glass windows that depict biblical subjects or saints and high vaulted ceilings. The architect George Studuhar used Gothic-style pointed-arched vaults and half vaults in the design. The church was dedicated by Bishop Lillis on September 2, 1908.

Unfortunately, during the 1920s and 1930s, the rural population dwindled. In 1967 the church was closed by the Archdiocese of Kansas City, as there were only 20 remaining families in the parish. In 1970, former parishioners established the St. Bridget Historical Society to maintain the church and cemetery. In 1972, the Archdiocese of Kansas City in Kansas gave the deed to the church building to the St. Bridget Historical Society.

At one time, in addition to the church and parish house, stood a school, a convent, a parish hall, and a few town buildings. There was also a general store and a few residences located near the church.

The church is located on 29th Terrace between Bison and Cherokee Roads. The Cemetery is located one-half mile south and east of the church. It is the original site of the first church building, erected in 1862 or 1863. The cemetery is still being used by former parish families.