St. Francis, Kansas the county seat of Cheyenne County, is located on the Republican River in the central part of the county.

In April 1886, Governor John A. Martin issued a proclamation declaring that the unorganized Cheyenne County was to be organized. It was named after the Cheyenne Indians who roamed the western plains at that time. Bird City was made the temporary county seat. 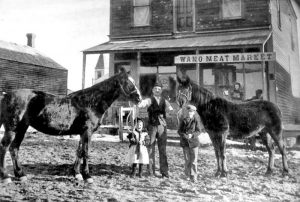 The first settlement in the county was Wano, located about 1.5 miles northeast of present-day St. Francis. By 1887, grade surveys were completed for the Chicago, Burlington & Quincy Railroad to come through. A site was chosen just to the south of  Wano to become the station. However, there was some difficulty obtaining a good title at the townsite of Wano, and a new townsite called St. Francis was surveyed and plotted in November 1887. The town was named for Captain A.L. Emerson’s brother. Emerson owned the land where St. Francis now stands.

December 5, 1887, was the day set to begin occupying the new site. Collins Bros. and James W. Midgley were the first to start improvements. On July 8, 1888, the first train arrived to a great celebration. 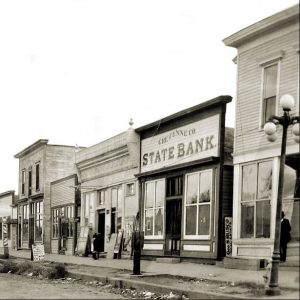 The people of Wano received lots in the new town and free transportation for their buildings to be moved to the new site. Soon, several Wano buildings were then moved to St. Francis, including a bank and the post office. The post office name was officially changed to St. Francis on April 18, 1888, and the last building was moved from Wano on May 2, 1888. That year, some $50,000 was spent on improvements in the way of buildings.

As Wano had been incorporated and had a full corps of officials, their last ordinance passed was to prohibit the leaving of any cellar or opening on the old townsite in such a condition that animals or travelers by night might fall into it.

By an election held on February 26, 1889, St. Francis was made the permanent county seat. Unfortunately, half of St. Francis burned down in one hour in 1890. In 1893, the town, like the rest of Kansas, suffered from the grasshopper scourge, which caused many settlers to leave the area 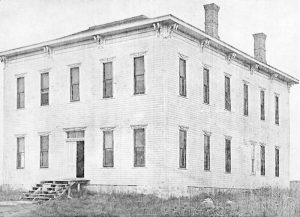 In 1898, the St. Francis Elementary School was erected.

The town was incorporated as a city of the third class in April 1903, and officers were elected including Mayor, L. E. Harrison. The St. Francis Herald newspaper began in 1904 and is still published today.

By 1910, the city had two state banks, a weekly newspaper called the Herald, schools and churches, all lines of retail establishments, telegraph and express offices, and an international money order postoffice with two rural routes. The town was located in the midst of a large area of land adapted to farming and stock raising, for which it is the receiving and shipping point on the Chicago, Burlington & Quincy Railroad. At that time, the city was called home to 492 people. 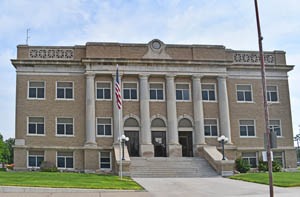 In the next decades, St. Francis slowly grew. In 1925 a new courthouse was built.

On May 31, 1935, St. Francis as well as other cities in Colorado, Nebraska, and Kansas suffered from the  Great Flood on the Republican River. Though the region was in the midst of the Dust Bowl era, which was characterized by below-normal rainfall and severe dust storms, that May was wet. From May 10 through May 20, several thunderstorms moved across eastern Colorado and southwest Nebraska. During the night of May 30-31, torrential rains fell over some parts of eastern Colorado, western Kansas, and southern Nebraska. Witnesses reported a wall of water surging east out of Colorado, lifting homes and barns from their foundations and twisting railroad tracks as if they were toys. 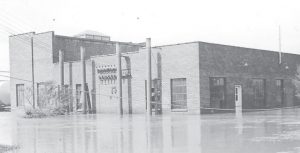 The St. Francis Herald reported that the flood swept past St. Francis, Kansas dumping as much as 24 inches of rain in only minutes. The waters, over a mile and a half wide, swept past the city at about 3 a.m. with no warning. People, livestock, buildings, machinery, trees, bridges, fences, and highways were swept into a new channel cut through the county. When the waters subsided two days later, over 113 lives had been lost and there were millions of dollars in losses in the region. St. Francis lost two victims to the flood. 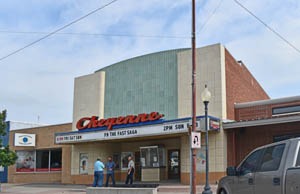 In 1970, the population peaked in St. Francis at 1,725. Unfortunately, the Nebraska, Kansas & Colorado Railway stopped operating through the city in about 2015. 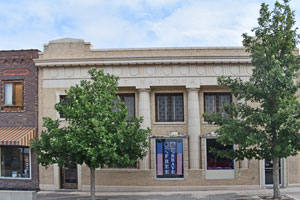