The area where Terra Cotta, Kansas once stood by Kathy Weiser-Alexander.

Terra Cotta, Kansas is an extinct town in Ellsworth County.

One of the first establishments in the area was the Spring Creek Stage Station, built when the Butterfield Overland Despatch began to run along the Smoky Hill Trail in 1859. Located about 1.5 miles west of the future town of Terra Cotta, the Butterfield Stage would continue to run until 1870. There are no remains of the station today. The station site was located ½ mile west and ½ mile south of the  Junction of K-140 & K-141 Highways.

In 1867 a man named Thomas Mullen moved to Kansas from Illinois and purchased a quarter section of land about six miles southwest of Brookville. Mullen established a business shipping clay and sand from his property. Running diagonally through his quarter section, the location of the Kansas Pacific Railroad made it ideal for shipping out his products. The shipping location was called Mullen’s Siding. Before long, about 15-20 people lived near the siding, and the small village was called Rock Springs. In 1876, a school district was organized in the area, and the Rock Springs School building was erected that summer. 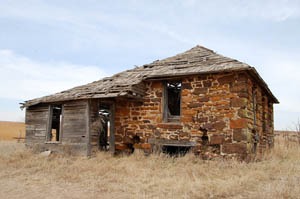 An old building in the Terra Cotta, Kansas area by Kathy Weiser-Alexander.

In 1878, Tom Mullen, along with a man named S.M. Simpson from Lawrence, Kansas, laid out a townsite, and when it gained a post office on July 2, 1878, it was called Terra Cotta, meaning “colored earth” for the red clay in the surrounding hills. Monroe Loomis became the town’s first postmaster. Monroe and his brother, Frank Loomis, also built a grocery store, elevator, lumber yard, and a hotel. S.M. Simpson, in the meantime, sold out his half interest to the townsite to a group from Connecticut.

Later, the Loomis brothers sold the hotel to a man named Bliss, who sold it to a man named Fletcher, who added a grocery store. Bliss, in the meantime, started a blacksmith shop. Dave Burrall and Mr. Williams established a cheese factory. However, the vast majority of the population made their livings from farming and ranching. The town soon grew to a population of 75 people.

In 1885, large stockyards were built, and between 1886 and 1912, more cattle were shipped from Brookville and Terra Cotta than from any other place between Kansas City and Denver, Colorado. But, Terra Cotta’s life would be short. In 1887, a prairie fire swept through the area and burned down the hotel. The following year, a recession hit, and several families and businesses left. The elevator was moved to Shady Bend, in Lincoln County, some 30 miles to the north. Mr. Bliss moved his Blacksmith Shop to Venango, about nine miles south of Terra Cotta, Mr. Fletcher moved his grocery store to Kanopolis, and Tom Mullen ceased a large part of his clay operations.

By the early 1890s, almost all the businesses had left. However, the post office remained open, and Mrs. Tom Mullen became postmaster in 1897, running it until it was discontinued in 1913. In 1900, though the businesses were gone, the Union Pacific Railroad built the new Terra Cotta Depot. By 1910, only 20 people were living in the town, and on March 31, 1913, the post office closed its doors forever.

Though Terra Cotta showed much promise, the town was short-lived, and today, nothing is left of the old townsite except the railroad tracks. The 1900 depot now stands in Ellsworth as part of the Hodgden House Museum complex.

Terra Cotta was located on the Union Pacific Railroad about 17 miles east of Ellsworth.