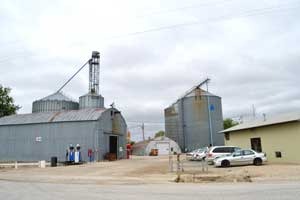 Vliets, Kansas is an unincorporated town in Marshall County. Located on the Van Vleit farm it was named for the family when it gained a post office in November 1887. It was officially platted and laid out in 1889 along the Central Branch Railroad and the Vermillion River.

The east elevator was built and operated in 1889 by the Union Commercial Company, an organization of Swedish men. T.A. Buck owned and operated another elevator known as the Buclo elevator. The annual shipments averaged 150,000 bushels of grain. A school was organized and built in 1899 at a cost of $2600. The building contained two rooms, in which four grades were taught and one year of high school. The local telephone system was owned by the State Bank of Vliets. The first store was owned and managed by William Herda.

In 1910 the main lines of business and professional pursuits were represented. It had banking facilities, telegraph and express offices, and a post office with one rural mail route. The population in 1910 was 350. 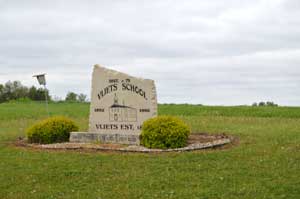 A stone marker designates where the Vliets school once stood by Kathy Weiser-Alexander.

A large general merchandise store was opened by J. M. Owen in June 1914. Owen had lived in the area for decades and was engaged in farming. The next year, the Farmers Union Co-operative Business Association was organized in April and opened for business in September 1915, with a capital stock of $10,000. The plant was built at a cost of $5000; which included an elevator, coal house, corn crib, office, and full equipment of machinery with which to operate. The company handled grain, flour, cream, eggs, poultry, and salt. The first year the shipment of grain was 120,000 bushels. The local telephone system is owned by the State Bank of Vliets. The Pelican restaurant was owned and managed by F. L. Rochefort. He was also a registered optician. A barbershop was also located in the same building.

Though the small community appeared to be doing well, by 1917, its population had been reduced by more than half down to about 150 people.

Over the years the population of this small community continued to dwindle. It school was discontinued in 1960 and no longer stands today. The post office closed in December 1992.

Today, Vliets is primarily comprised of a Co-op elevator. It is located between Vermillion and Frankfort. 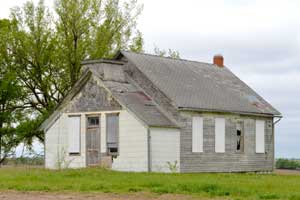