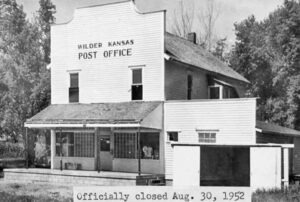 Wilder, Kansas was a village in Monticello Township in the extreme northern part of Johnson County.

The town was located on bottomland about a mile south of the Kansas River. It was situated along the  Atchison, Topeka & Santa Fe Railroad 15 miles southwest of Kansas City, Kansas.

The first settler was Simon Walters. The town was named for E. Wilder a railroad employee. A post office was established on December 13, 1875, with L.S. Hayes serving as the first postmaster.

A sawmill with a small grist mill attached was built just east of town by P. P. Hall, in 1879.

In 1910, the town had several stores, a money order post office, telegraph and express facilities, and a population of 84.

Wilder and Frisbie Station, just 2.5 miles to the south, were once referred to as the “potato belt,” as many carloads of potatoes were shipped from here every year. 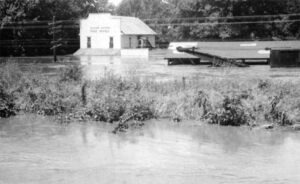 In the summer of 1951, Wilder was just one victim of the Great Flood which caused massive damage in eastern Kansas and Missouri which killed 24 people and caused thousands to abandon their homes, schools, and businesses.

The town was located along Wilder Road in the western portion of Shawnee, Kansas.