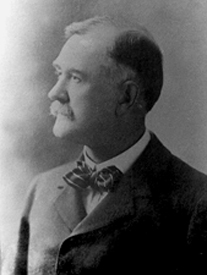 William Alexander Harris as a civil engineer and United States Senator from Kansas.

Harris was born in Loudoun County, Virginia on October 29, 1841. He attended school at Luray, Virginia, until his eighth year, when his father, William H. Harris, was appointed minister to the Argentine Republic, and for four years the family lived at Buenos Ayres. When they returned to the United States, he began his technical education and graduated from Columbia College in Washington, D.C. in June 1859.

Immediately afterward he went to Central America and spent six months on a ship canal survey, but returned home and entered the Virginia Military Institute in January 1860. He was in the graduating class of 1861, but the outbreak of the Civil War stopped the studies, and in April he and his classmates entered the Confederate service. He served three years as Assistant Adjutant-General of Wilcox’s Brigade and as Ordnance Officer of Generals D. H. Hill’s and Rodes’ divisions of the Army of Northern Virginia.

In 1865, he came to Kansas and entered the employ of the Union Pacific Railroad as a civil engineer. The road was then completed to Lawrence, and his first work was to build the Leavenworth branch, which he completed in 1866. Harris was the resident engineer of the road until it was completed to Carson in the fall of 1868.

He then bought land from the Delaware Indian Reservation and began farming and raising stock. In 1876 he became interested in short-horn cattle and within a short time, his herds were known throughout the country for their high quality.

When he was nominated for Congressman-at-large by the Populists in 1892, he was in Scotland, comparing notes with breeders and planning for the improvement of his stock. His nomination was endorsed by the Farmers’ Alliance and the Democratic Party and he was elected. In 1894 he was re-nominated but defeated. In the fall of 1896 he was elected to the State Senate from the Third District, and the following January he was elected to the United States Senate to succeed William A. Peffer. Harris took an active part in railroad legislation in Kansas and in Congress but was unable to have his ideas carried out. He was deeply interested in the Nicaraguan Canal Project when it came before the United States Senate and was a member of the committee having the question of the proposed canal in charge. He saved millions for the government in the Pacific Railroad claims when that question came before Congress for settlement.

Although an ex-Confederate he was loyal to his state and country, voting for what he deemed best, and measured up to the standard of true statesmanship. After retiring from the United States Senate, he made one political campaign as the Democratic candidate for governor of Kansas.

From 1906 he resided in Lawrence, Kansas, although connected with the National Livestock Association with headquarters in Chicago. He was appointed regent of the State Agricultural College at Manhattan and took an active interest in the development of that institution and the United States experimental stations.